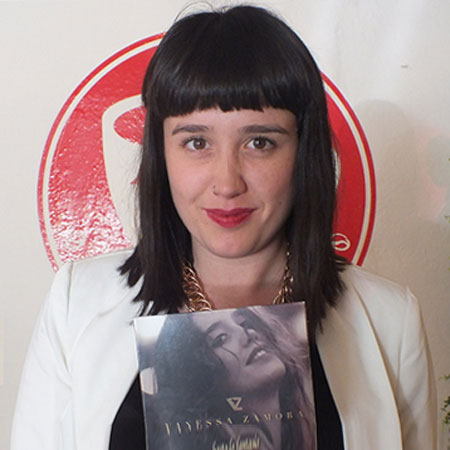 Vanessa Zamora is a Mexican singer and songwriter.Zamora began her music career started making a cover video of various artists and uploading them on YouTube or other social sites where she is obtaining a large number of visits in his videos and thus making herself known.

Vanessa Zamora was born as Vanessa Zamora Ramirez on July 22, 1991, in Tijuana, Mexico.  She holds Mexican nationality .and is of Mexican descent

Zamora's parents were pianists. Since her early age, she was interested in the cla s sic arts, drums, ballet, learning guitar, acting, and modeling.

Zamora joined Academia de Musica de Mexico where she learned piano cla s ses. At the age of nine, she was also instructed in drums and guitar and took a small course where she learned the basics and thus having a recital.

In 2009, Zamora enrolled at the University of Universidad Autonoma de Guadalajara. She also graduated in Communication Science as an honor student in 2013.

During her college days in 2009, Zamora began her music career started making a cover video of various artists and uploading them on YouTube or other social sites where she is obtaining a large number of visits in his videos and thus making herself known.

In 2012, Zamora completed her first extended play 'Correr.' The same year, she presented the single "No Sabes."

Vanessa Zamora is currently single and is not married yet. However, she has opened about her past affairs in an interview. She revealed that she had written a single song long before which was not included in an album.

Zamora did not dare to release the song as it was about her and the person she dated. The lyrics of the song described the person who she lived together for about four years. However, the relation dissolved after her boyfriend revealed that he is a gay.

Zamora still wanted him after all those, but the couple could not be together. She never shared her personal detail to anyone but has come with the different heart lately. She was afraid of her family in the past as her family was very conservative.

However, Zamora has recently built up an attitude not to limit herself. She is set to release her new album and has made up her mind to express herself.

Vanessa Zamora loves traveling and often shares her experiences and photography on her social sites. She loves playing musical instruments, and she has close connecting with them.

Vanessa Zamora earns lots from her singing career. However, her net worth might be million, but till date, her current net worth has not been disclosed yet.