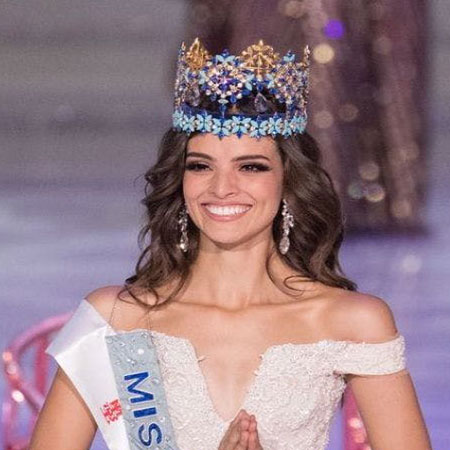 Vanessa Ponce is a Mexican model who became popular as the winner of Mexican Top Model 2014 and Miss Mexico 2018. She doubled her fame after she won the Miss World title in 2018 December. She becomes the first Mexican model and beauty queen to win the Miss World crown. She got her dream come true when she was crowned the Miss World Title on December 8, 2018.

Vanessa Ponce was born Silvia Vanessa Ponce de León Sánchez in the Guanajuato, Mexico on 7 March 1992. She was born under sun sign Pisces which describes her as a selfless person who has the willingness to volunteer others. Ponce holds a Mexican nationality and belongs to the North American ethnical background.

De Leon grew up in his hometown Guanajuato where she completed her education. She received a degree in International Business from The University of Guanajuato. She also earned a diploma in Human Rights through the National Youth Institute.

Vanessa developed a keen interest in modeling career since her childhood when she was fascinated by a Canadian model Coco Rocha.

Vanessa started pursuing a modeling career after completion of her graduation. She participated in Mexico's Next Top Model Season 5 held in 2014. She emerged as a winner of the show beating 13 contestants.

After winning the season 5 of MNTM, she participated in the 2018 Miss Mexico pageant where she was crowned Miss Mexico World title in a ceremony held in Saon Imperial de Villa Toscana on 5 May 2018.

She represented Mexico at Miss World 2018 pageant held in Sanya, China. There she showed her skills and glamor and finally created history by winning Miss World 2018 for Mexico beating 117 beauty pageant titleholders from all over the world. Miss World 2017  Manushi Chillar crowned her successor Miss World 2018  Vanessa Ponce

Vanessa Ponce's Net Worth And Charity

Her source of income is the prize money she got from the Pageant shows including as the Miss Mexico World and Mexico's Next Top Model winner.

She is living her life happily with her family with her huge earning. She owns a Volkswagen Tiguan car which costs around $50k.

She is a humanitarian and social activist who is actively involved in changing the world in the best way. She volunteers in the school Nenemi which is actively providing intercultural knowledge to indigenous tribes and help differently able children.

Vanessa Ponce is working with her personal motto, "We all need each other”. She is much focused in her career rather than relationships. As of 2018, Vanessa Ponce is single and not dating any boyfriend.

When she was asked in Q&A segment, her winning question and answer was

Question: When I became a Miss World, I was able to use my position to help people. How would you use your influence as Miss World to help others?

Answer: Good night, everyone. I would use my position just the way I've been doing it for the past 3 years – being an example. We all can be an example of good in the world, we all have to care, we all have to love, we all have to be kind. It don't cost a thing. Helping is not that hard. We just really need the world to make a change. You just need to go there. There's always someone that'll need what you have to offer.

She has kept most of her personal life a mystery.