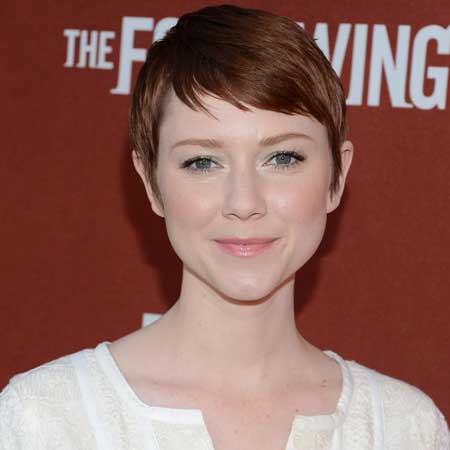 Valorie Curry is an American film and television actress, best known for portraying as Emma Hill is an American television drama series, The Following. Curry will soon appear in the Sci-fi film After Darkness alongside Natalia Dyer, Kyra Sedgwick, Tim Daly, and other Hollywood stars. Curry’s acting credits include the series House of Lies and Veronica Mares. She also featured in the movies The Twilight Saga: Breaking Dawn 2 and Blaire Witch.

Valorie Curry was born on 12 February 1986, in Orange County, California, United States. She belongs to white ethnicity and holds an American nationality.

Curry is the youngest of three children and grew up in Orange County, California. He went to High Schoo in La Habra, California in 2004. She enrolled at Fullerton State where she obtained a degree in theater.

Curry worked with The Second City and Phantom Projects theater groups, performing roles including Jennie Mae in The Diviners and Monique in Out, Out, Bried Candle!.

Curry also played the roles in Oklahoma!, Bus Stop, How To Succeed in Business Without Really Trying and The Diary of Anne Frank.

Valorie Curry began with the role of Jennie Mae in The Diviners and later appearing in the show Veronica Mars.

Curry worked in the TV series with American actor & musician Kevin Bacon and his wife, Kyra Sedgwick, on the show The Following in 2013. She also played the lead role of two seasons for which she gained a lot of attention and fame.

Besides this, Curry also featured in House of Lies, The Tick, Psych and much more.  She also appeared in video games such as Watch Dogs as Latoya Asad and Detroit: Become Human as Kara.

Curry is an active actress and is a part of several movies and television series, so probably she earns a good amount of salary from her work. Her current net worth is estimated to be around $3 million as of February 2019.

Although there is no information about her earnings in the media and tabloid sources, the average actress earns around $39.84 per hour according to Chron.

Valorie Curry married to her boyfriend, Sam Underwood who is a British actor and portrayed the twins Luke and Mark Gray in The Following.

These two are first met on the set of The Following, which was the turning point of her life, not only professionally but personally as well.

The couple begins dating after the end of their term in the series in 2015 and has been together since.