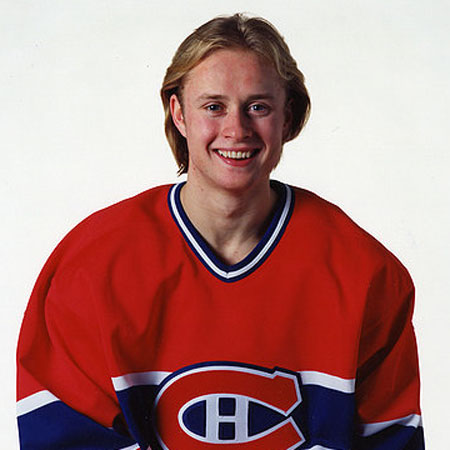 During his active years, he played 10 seasons in the National Hockey League (NHL) for several ice hockey teams such as Montreal Canadiens, Calgary Flames, Florida Panthers, St. Louis Blues, and Dallas Stars. But unfortunately, Bure took retirement from the hockey because of his hip injuries in 2005.

Valeri Bure was born to Vladimir and Tatiana Bure on June 13, 1974, in Moscow, Soviet Union and is the youngest child. He was born as Valeri Vladimirovich "Val" Bure. Her family is originally from Furna, Switzerland.

Bure’s ancestors used to make expensive watches for the company named Russian tsars from 1815–1917. He, however, has a sad childhood as his parent separated when he was 9-year-old. As far as his nationality is concerned, he is American and is of Caucasian ethnicity.

In 1991, he shifted to North America with his father and brother, Pavel. They first settled in Los Angeles where his father continued to train both of his sons in the physical conditioning and hockey, and since then Valeri wanted to be a hockey player.

Starting in the late 90’s Bure played three games with HC CSKA Moscow of the Soviet Championship League before he left his birthplace Soviet Union.

At 17, he was allowed to play junior level hockey and joined the Spokane Chiefs of the Western Hockey League, abbreviated as WHL making him the first player from Russia in the league’s history.

In the first season at the WHL, he was able to record 49 points in 53 games in 1991–92 for the Chiefs. The Montreal Canadiens then selected him at the 1992 NHL Entry Draft. In the final season, he managed to collect 102 points and got named to the Second All-Star Team.

In 1994-95, Valeri Bure spent most of the seasons with the Fredericton Canadiens, Montreal's American Hockey League (AHL) affiliate.  In that period he got 23 goals and 48 points in 45 games.

Also, in 1995, February 28 he received a recall to Montreal late in the season and made his NHL debut against the New York Islanders.
Later in that year, he battled some severe injuries, two concussions and a kidney injury due to which he played 64 games, 13 fewer than the previous season.

Playing for the Calgary Flames, he developed as an offensive player and became one of the team's leading scorers. In the 1998-99  season, he was considered as the third best player in the team scoring 6 goals and 53 points.

Also, he was part of the World team at the 2000 All-Star Game where he played on a line with his brother. On June 24, 2001, he was traded by the Flames along with Jason Wiemer to Florida Panthers

During 2001- 02 season he wasn’t able to perform due to his knee ailment that began bothering him before the season and due to injury missed 37 games.

His graph in terms of career went a little low in the 2002-03 season. He could only score 5 goals and 26 points in 46 games for Florida.  After that Valeri Bure was traded to St. Louis Blues on March 11, 2003, in exchange for defenceman Mike Van Ryn. After being free from injury for the first time in two seasons, he scored 20 goals for the fifth time in his career.

Later he got placed on the Stars’ top line with other players Jere Lehtinen and Mike Modano and recorded 7 points in 13 games to conclude the regular season.

Bure wasn’t able to play anywhere in 2004–05 as the entire NHL season was canceled due to some labor dispute. The same year, his second hip surgery injury cost him to miss the whole season so he decided to retire at the age of 31.

Valeri Bure got married to his long-time girlfriend Candace Cameron on June 22, 1996. As believed the duo were just kids when they first met and they grew up knowing each other.

In one of the interviews, actress, Cameron stated their love has never changed since the time they were teenagers.

Also, the couple celebrated 21 years of their love on June 22, 2017, and Candace uploaded a picture with a caption

It all started here. He had me at first stride. Happy 21st anniversary my love #FrederictonNB #MontrealCanadiens #2ndDate #1994

The couple shares three children altogether. They have a daughter named Natasha, born in 1998 and sons, Lev and Maksim, born in 2000 and 2002 respectively.

Also, Bure mentioned that the main reason for him to retire from hockey in 2005 was that he wanted to spend more time with his family and children and let his wife return to acting.

In 2007, the couple opened a restaurant named "The Milk and Honey Café'' in Florida but closed it when they moved to California.

In the year 2010 Bure returned to the contest on the season of the Canadian Broadcasting Corporation's figure skating reality show Battle of the Blades. He and his partner Ekaterina Gordeeva won the prize money of $100,000 but donated it to charity.