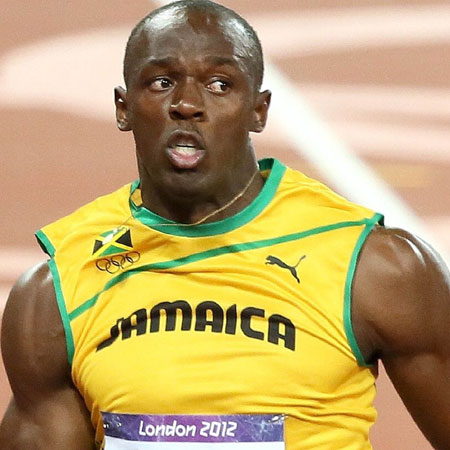 Usain Bolt is a retired Jamaican sprinter, well-known as the first athlete to hold both the 100 meters and 200 meters world records.

Usain Bolt was born on 21 August 1986 in Sherwood Content, a small place in Jamaica. He is the son of Wellesley and Jennifer Bolt. He has a brother, Sadiki and a sister, Sherine.

He is black in ethnicity and holds Jamaican nationality.

Usain's parents had the local grocery store in the rural area, and Bolt spent his time playing cricket and football in the street with his brother. During his childhood, Bolt joined Waldensia Primary, where he began to show his sprinting potential, running in the annual national primary schools meeting for his parish.

By his age of twelve, he had become the school's fastest runner over the 100 meters distance.

Usain Bolt performing for Jamaica in his first Caribbean regional event, clocked a personal-best of 48.28 s in the 400 meters in the 2001 CARIFTA Games, winning a silver medal. The 200 m also yielded a silver, as Usain finished in 21.81 s.

Bolt made his first appearance on the world stage at 2001, IAAF World Youth Championship in Debrecen, Hungary. Running in the 200 m event, Bolt failed to qualify for the finals but set a new personal-best of 21.73 seconds.

The 2002 World Junior Championships were held before a home crowd in Kingston, Jamaica and, gave him a chance to prove his credentials on the world stage.

Under the guidance of his new coach Fitz Coleman, Usain Bolt turned professional in 2004, starting with the CARIFTA Games in Bermuda. Bolt became the first junior sprinter to run the 200 m in under twenty seconds, taking the world junior record outright with a time of 19.93 s.

Usain Bolt announced that he will run the 100 meter and 200-meter events at the Beijing Summer Olympics. In the 100 meter final, Bolt broke that world record, winning in 9.69 seconds.

It was not only the record set without a favorable wind, but also visibly slowed down to celebrate before he finished, an act that caused much controversy afterward. Additionally, he went on to win three gold medals and break three world records in Beijing.

In 2015, Usain Bolt faced few challenges. He ended up as second at the Nassau IAAF World Relays in May but secured an individual win in the 200-meter event at Ostrava Golden Spike event the same month.

Later in 2016, Bolt returned to Olympic glory at the 2016 Summer Olympic Games when he won gold in the 100-meter race, making him the first athlete to win three great titles in the event.

Bolt finished the race in 9.81 seconds with American runner and rival Justin Gatlin, who won silver, 0.08 sec behind him.

Looking towards his 200 meters, in an interview with CBS News, Usain detailed his pride over his 2012 performance: ''It's what I came here to do. I'm now a legend. I'm also the greatest athlete to live. I've got nothing left to prove.''

Usain Bolt has been rumored to date several women to date, however, it has not been confirmed yet.

The fastest man is currently dating Kasi Bennett. The couple has been dating since 2014, and now, Bolt has announced that he will soon get married to his longtime girlfriend.

Usain Bolt has earned an enormous amount of money as Jamaican sprinter titled as "The Fastest Man.'' He is one of the highest paid athletes in the world. Typically, Bolt earns around $20 million per year which comes from endorsements usually.

He has endorsements deal with huge brands like Nissan, Gatorade, Visa, Virgin Media, Hubolt, and Puma. Bolt charges $ 250-300,000 for a track meet appearance, which adds up to his total net worth of $ 60 million.