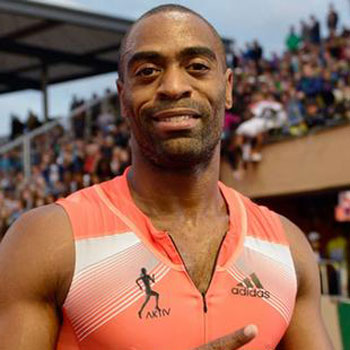 American track and field sprinter, Tyson Gay, ranked as No. 1 in the world in the 100-meter dash twice in his career. He won numerous medals in major national and international competitions. Regarding his personal life, he had a daughter who was killed in a shoot in Trinity Gay.

Tyson Gay was born on August 9, 1982, in Lexington, Kentucky under the birth sign Leo. Gay is American as per nationality and belongs to African-American ethnicity. He is the only son of Daisy Gay and Greg Mitchell. His parents raised him with his older sister, Tiffany Gay who was a keen sprinter.

Gay was born in the family of an athlete. His grandmother ran for Eastern Kentucky University and her mother completed in her youth though she was pregnant with her first child in her early teens. His mother encouraged him to race at every opportunity at school.

He is the first athlete in the school's history to win an NCAA 100-meter title. Hardworking and energetic Tyson became a three-time Class 3A 100-meter state champ while at Lafayette High School and his 10.46 state-meet record from 2001 is still standing as of 2012.

They say slow and steady wins the race which is proved by Tyson Gay. Gay tended to be a slow starter on the track, worked hard to improve and broke the Lafayette High School stadium record for the 200 meters. Under the tutelage of Ken Northington, a former 100-yard dash state champion, he began working on his technique and rhythm. Then setting a focus point, he was a more composed athlete on the 100 meters by his senior year, winning the state championship in the event and setting a new championship record of 10.60 s.

In spite of this, his mother noted that he was not fully applying himself and was taking his abilities for granted. Not a studious child, he failed to achieve the grades needed to enter a Division I sports college. However, the Kentucky High School State Championships in June 2001 demonstrated his abilities: he won gold in the 100 m, in the 200 m he took silver. Being convinced by college coach to attend Barton County Community College, he first met Jamaican sprinter Veronica Campbell-Brown, and the two formed a close bond, becoming training partners.

Gay started his international career in 2005 after he raced in the USA Outdoor Championships where he placed second. By the end of season 2005, he won a gold medal at the World Athletics Final which was one of his first major championships. Two years later, he won the 100 and 200-meter sprints at the World Championships and took away gold.

Continuing from the time being the hardships finally turned into effect making to win silver in 2012, three gold in 2007, gold silver in 2009, three gold and a silver in 2006, gold in 2005 but couldn't get gold in 2008 and 2012. With all of these successive results, he has become the inspiration for many of the ones with the lesson that success comes step by step not all at once.

Tyson Gay has an estimated net worth of $12 million. Gay earns an impressive amount from his playing career. In 2016, he bought a home in Lexington, Kentucky worth $150k and also owns another house in Florida worth $750k. With such earning, he is living a lavish life.

Tyson Gay had a daughter, Trinity Gay who died on 16th October 2016 ina shoot in the parking lot of a restaurant in Lexington, Kentucky. She died at the age f 15 at the University of Kentucky Medical Center shortly thereafter.

Gay shares the only child with Shoshana Boyd. He has not disclosed his relationship with Boyd. The couple might have an affair before the birth of their child. The daughter used to live with her mother and grandmother in a modest $15k home.

Besides, he was imprisoned for 10 months after he had tested positive for an unnamed banned substance.

Check out the skills of Tyson Gay: