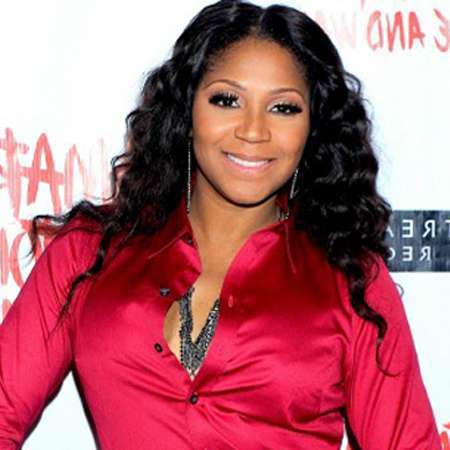 An American singer, actress, and reality television personality, Trina Evette Braxton, is known best as a member of the R&B group The Braxtons. Born and raised in Severn, Maryland, she holds American nationality and belongs to African ancestry.

Her father was a Methodist clergyman and power company worker named Michael Conrad Braxton, Sr. and her mother is Evelyn Jackson, who was a former opera singer and cosmetologist, and pastor. She has one older brother named Michael, Jr., and four Sisters Toni, Towanda, Traci, and Tamar.

Trina and her siblings first ever performing experience was in the church choir. As she was raised in strict religious daily living, her choir singing uplifted her talent of singing. Her career starts in the band with her siblings Toni, Traci, Towanda, Tamar, and herself as The Braxtons.

When the name Trina Braxton comes, the name of her siblings is inseparable. They signed their first record deal in 1989 with Arista Records and released their first single called “Good Life.”

Trina started her solo career in 1997 as a singer as well as an actress. The Braxton sisters came together again in 2015 with a new album called Braxton Family Christmas which charted number 4 on US Heatseekers Albums in December 2015.

She has been active in the industry since 1989 till date and her genres of entertainment are mainly R&B, Soul, and Pop. She is currently signed with Soltri Entertainment since 2012.

Moving on to her personal life, she is now single as she divorced her husband Gabe Solis. Her husband Gabe is a software developer born to Mexican parents in Texas. Gabe and Trina had met at a bar called American Pie in Atlanta.

Initially, they did not want to be in a serious relationship but just wanted to have fun which turned the other way and they happen to get married after a year and a half of being together.

The couple got married in August 2003 but later got divorced in April 2015 after she found her husband Gabe was cheating on her. It was a tragic time for her but now she is moving with the time and busied herself with her professional life.

The couple has two children together and no information is available on them. She loves her children to the moon and back.

There is a buzz of rumors going in the internet media on the Braxton Family which involves her sisters and her. Trina is the co-owner of the recording studio “The Ba s s Mint” which is located in Atlanta. She has her own hair collection line and a bar company called Bar-Chix.

Trina is a gorgeous lady with a beautiful figure and personality. She flaunts sexy in any of the outfits she wears and looks stunning. She has a beautiful height of five feet and six inches with accompanying body weight. She is very concerned about her diet and regular exercise to keep fit, balanced, and healthy.

She is one of the perfect examples of Beauty with Talent. Therefore, she is one of the sought-after personalities in the television industry which keeps her high net worth of 1.5 million dollars and makes her worthy of a very handsome salary to earn.

To know more about her, one can subscribe to her on her Youtube, Spotify, Deezer, and TuneIn, and other internet sites like Wikipedia, IMDb, and several other websites provide a short bio on her.