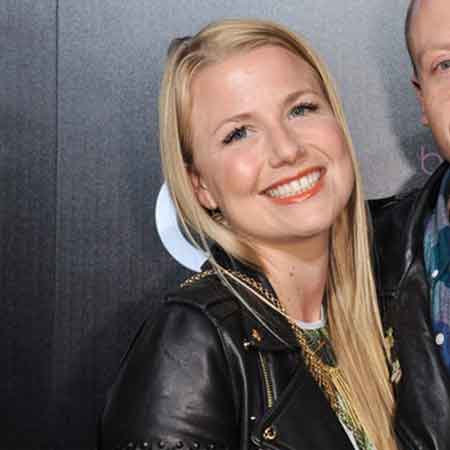 Tricia Davis is a former nurse who is working as an artist and merchandise manager for Macklemore and Ryan Lewis' full national tour. She is also famous for being a wife of Grammy Award Winning musician, rapper, Macklemore. Besides this, she is also a music video producer.

Who Is Tricia Davis?

Tricia Davis was born on 29 January 1984 in the United States of America. She holds American nationality and belongs to White ethnicity. The information about her parents and siblings are not revealed.

Davis attended Seattle Pacific University where she graduated with a degree in nursing.

Tracia Davis first started her career as a nurse. But now she is serving as the Merchandise and Artist manager for her husband Macklemore and his music partner named Ryan Lewis. Her works involved branding, public relations, marketing and business decisions for Macklemore LLC.

She has also provided creative storylines for the video of Macklemore's songs which include Thrift Song, Wings, Same Love, And We Danced. In 2013, Macklemore and Ryan Lewis were the most streamed artist on the U.S. Billboard chart.

Tricia Davis' net worth and salary are not disclosed. It is still under review. However, it can be estimated that she must have ama s sed a six-digits figure from her successful career.

According to The Richest, Davis' husband has a net worth of $16 million whereas Celebrity Net Worth estimated his net worth to be around $25 million. His single Thrift Shop reached number 1 on the U.S. Billboard Hot 100 chart in 2013  and more than 2.2 million copies were sold. From that song, he was able to earn $9 million in a year. And from the album named The Heist, he made $5.5 million.

Sources report that the rapper took the house on the market for $1.7 million, in Sep 2017.

Who is Tricia Davis' Husband?

Talking about Davis' personal life she is married to Macklemore. She first met him in the year 2006 when Macklemore was struggling with alcohol and substance abuse. They first had a conversation on the social media site MySpace where they chatted for some time. In a 2013 interview, Macklemore revealed:

I met my girlfriend through MySpace, who I’ve been with for a long time. So MySpace was huge in my life!

The couple exchanged vows on 27 June 2015 exactly a month after their daughter was born. Though the pair seems very happy and in love today, it was always the same for them. Tricia was highly criticized for falling in love with a drug addict.

Everyone she knew including her mother told Tricia to leave Macklemore but, that is not how love works. When you fall for someone you will do anything to be with him/her. Likewise, Tricia also went against her friends and family to be with her now-husband and turned out her decision was correct. During an interview, she said:

When you fall in love with a drug addict, totally can't-afford-anything guy, and your mom is asking you what the heck you're doing, I mean, there is a reason why you're — I knew from the first time I saw him perform I was like, "He has that potential."

Together they have two daughters named Sloane Ava Simone Haggerty born on 29 May 2015 and their second daughter named Colette Koala Haggerty born on March 16, 2018. Davis' husband released a new song with his music partner Ryan Lewis named Growing Up which was dedicated to the baby.

CAPTION: Tricia Davis with her husband and daughter SOURCE: Entitymag

Tricia is active on social sites including Instagram named baba_g with more than 205k followers as of 2019. Mostly pictures of her husband and daughters can be seen on her Instagram account.