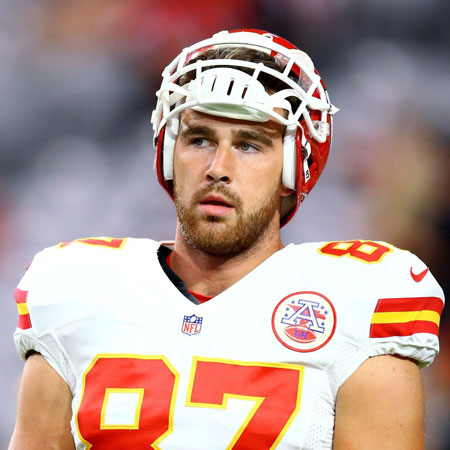 Travis Michael Kelce is an American Football player. He plays in the position of tight end for the Kansa City Chiefs of the National Football League.

He holds an American nationality and falls on the white ethnic group.

Travis Kelce was born on 5th October 1989 in Westlake, Ohio, United states. He was raised in Ohio. He went to Cleveland Heights High School in Cleveland Heights, Ohio. He was involved in football, basketball and even in baseball in his high school. He completed graduation from the University of Cincinnati.

Travis Kelce began his professional career with Kansa City Chiefs in 2013. He was drafted in the third round of the 2013 NFL Draft.  On 6th June 2013, he was signed by Chiefs to a four-year for $3.12 million.

Travis was fined $11,025 for ‘unsportsmanlike conduct’ on 30th November 2014 during a 16-29 loss to the Denver Broncos. He did an inappropriate hand gesture and stimulated a jerking motion to the Broncos Von Miller.

Travis Kelce began all 16 regular season games in the year 2015. He recorded 72 catches for 875 yards and five touchdowns which earned him his first Pro Bowl. On the NFL Top 100 Players of 2016, he was ranked 91st.

Travis Kelce signed a five-year contract on 29th January 2016 worth $46 million with a contract extension. He got rejected from the game on 6th November after when he received two ‘unsportsmanlike conduct’.

He was fined $24,309 on 11th November for his subsequent ‘unsportsmanlike conduct’ penalties the previous game. In NFL history Travis became 3rd tight end along with Jimmy Graham and Tony Gonzalez.

Travis Kelce has an elder brother named Jason Kelce. His brother is an American football center for the Philadelphia Eagles.The current relationship status of Travis is single.

E! Entertainment Television announced on 29th January 2016, that Travis starred on his own dating show entitled Catching Kelce. In the show, many women from the different state compete against each other. He ended up dating with one of the contestants of the show named Maya Benberry.

Maya is also the winner of the show Catching Kelce. After dating for four months, they broke up. Maya removed her photo with Travis from her Instagram account and revealed the news about their separation.

This 28 years old Football star has a good height of 6 feet 6 inches. He also has a proper body and has maintained it very well. He weighs about 260 lbs. He has brown hair and his eyes are also brown colored.