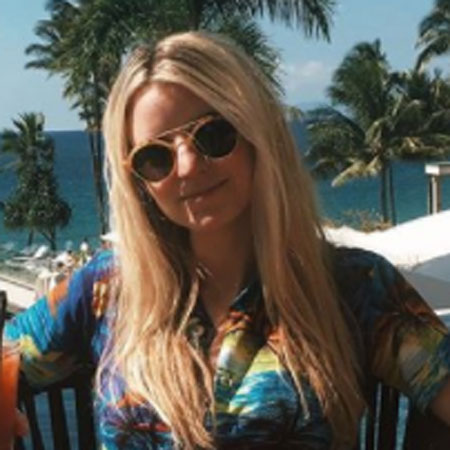 Instagram star, Tori Woodward is currently working as a legal intern at USC Immigration Clinic. She rose to fame after dating the member of The Chainsmokers, Alex Pall.

After dating for years, the couple broke up after Pall cheated on her with an unknown girl. Pall was caught kissing a lady in CCTV of his residence.

Tori Woodward was born Victoria Woodward on 3rd July 1991 in the United States under the birth sign Cancer. Woodward is American as per nationality, and as far as her ethnicity is concerned, she is White. Her parents raised her in New Jersey and later moved to New York.

In 2010, Woodward graduated from the University of Delaware. Later she earned the Bachelor’s degree of Arts in Politics & Media, Culture, and Communications from the New York University. She also studied Juris Doctor in USC Gould School of Law.

Tori Woodward joined Next Communication Inc. as an executive administrative assistant in 2013. After working there for seven months, she moved to John E. Osborn, P.C. as a paralegal. She used to assist the firm’s partners and associates with legal support for all proceedings and matters.

As of now, Woodward is working as a legal intern in USC Immigration Clinic.

Tori Woodward has an estimated net worth in six-figures. However, the exact amount is not confirmed yet.

Woodward is a traveling freak. As seen in her Instagram posts, she has been to many places including- Sahara desert, Tulum, and Daufuskie Island among others. She is a Channel (brand) lover and has several accessories of the brand.

Tori Woodward is unmarried and has no children. She is recently single after a controversial break up with her boyfriend, Alex Pall. Her former boyfriend, Pall is a founder of The Chainsmokers. The couple broke up after Pall cheated on her with an unknown lady.

The couple started dating in February 2014 and separated in January 2018 after her ex-boyfriend was caught kissing a lady and CCTV in his residence captured the moment. Woodward posted the snaps of the footage on her Instagram story writing,

They’ll look you in the eyes and tell you they love you. Then destroy you without a second thought.

Along with the pictures, she also posted several messages,

After hours begging him for scraps of honesty I chipped away just enough to confirm that this is not the first time he’s remorsely [sic] cheated on me,” wrote Woodward. “That ‘psycho bitch’ from Vegas, the ‘lame Instagram model’ caught on video and countless others he looked me in the eyes and swore on his life he never touched. Consistent outright denial faded to him explaining that because all men do it, it’s not that bad. And in different words, that because he’s famous now, he had a different rulebook for decency.

What’s perhaps the most amazing is that he HASN’T EVEN APOLOGIZED.

What he has done is everything he possibly can to stop this from coming out, from looking the kind of person who does what he’s done, You’re better than this. That’s right I am, but you’re not and if there was ever a time to hold powerful men accountable for their disgusting behavior it’s now.

Don’t be that guy. Don’t let your friend or brother or business partner be that guy. Basic respect for women in your life should not be such a hard standard to hold each other too.

I really appreciate all the kind messages I've been getting. I'm moving on with my life now with the satisfaction that I'm liberated from a horrible person and encourage anyone else in a similar position to know your worth and do the same.

Her ex-boyfriend, Pall spoke to TMZ after long silence after their split,

It’ll be good to get out of the country. She deserves the best. I wish nothing but the best for her. She deserves a better guy than me.

He even added that he felt guilty after the breakup and public shaming.

Woodward has a golden retriever as a pet.

Below, the video is about Pall cheating on Woodard upon an unknown girl: