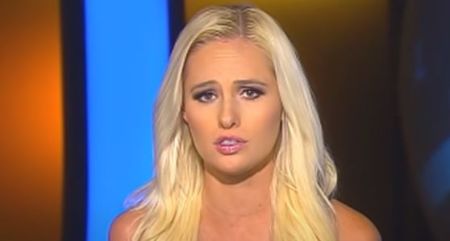 Tomi Lahren is a talented conservative political commentator, political operative, and former television host. She previously hosted Tomi On in the American multiplatform news network The Blaze. She joined Fox News in August 2017 after she was suspended from The Blaze in March 2017.

She has also served as a host on One America News Network's program OnPoint with Tomi Lahren. Many of her videos went viral with The New York Times considered her as a rising media star.

What Is The Age Of Tomi Lahren?

Tomi Lahren was born on August 11, 1992, in Rapid City, South Dakota, the United States of America. She belongs to the American nationality and is of mixed ethnicity. She is of German and Norwegian heritage.

Tomi Lahren’s childhood went well but in a very strict environment. She grew up in a military environment. It was kind of obvious that she had a good childhood but in a strict manner.

She went to a high school called Central High School for her early education. Later on, she moved to the University of Nevada for her higher education and from there she achieved her degree.

Career Highlights: What Is Tomi Lahren Popular For?

Tomi Lahren is one of the luckiest media personalities ever. In the year 2014, she was seeking an intern opportunity at OAN but she was so lucky that she had a golden opportunity to own a whole show.

Her show was named On Point and her work in that was absolutely brilliant. She worked for the show until its end in 2015. In the year 2016, she also appeared in The Daily Show with Trevor Noah hosted by Trevor Noah.

In January 2016, she endorsed Marco Rubio for president in the Republican Party presidential primary. In March 2017, she made a guest appearance on The View, where she studied that women should have access to abortion and accused those who held a pro-life position of being hypocrites. After that, The Blaze owner Glenn Beck criticized her for her comments and immediately suspended her with pay, which led to filing a wrongful termination suit.

In May 2017, she began working in a communications role at Great America Alliance, an offshoot of Great America Pac- a large pro-Donald Trump super PAC. In August 2017, she joined Fox News as a political commentator.

Tomi Lahren's Net Worth And Salary

Tomi Lahren’s net worth is $3 million, according to Celebrity Net Worth. Her Fox News colleague, Steve Doocy has a $2 million net worth. She has earned this amount of figure from her career. According to a source, her estimated annual salary is $200K, but it is not confirmed officially.

Lahren has also been involved in several charitable works and movements. Lehran has worked with various non-profit organizations to make a change in society.

Tomi Lahren is unmarried right now. She was in a relationship with her ex-boyfriend Jerad Christian and their relationship was going on very strong. The pair started dating in February 2015.

Her boyfriend, Jerad Christian, is a military officer. The pair met in San Diego during a date night in February 2015.

A native of Utah, Jered became a Navy Seal in November 2014. He was based at the Naval Amphibious Base Coronado in San Diego. Scrolling down her social media, Lehren is currently dating Brandon Fricke.

As per their social media, the two started dating in late 2018. The two were on December 2 spotted in Los Angeles and enjoyed their quality time. She has also posted a number of beautiful pictures along with her new boyfriend on her Instagram account where she has ama s sed over 1.9 million followers, as of May 2022.

Lahren is very good-looking and she is very talented. She has already made a name for herself at a very young age. She has done it all right in her career till now and all she needs to do is keep focused and everything will be fine for her and her career.

American conservative political commentator has a very bright future ahead of her. Her hot looks and sex appeal have never done any harm to her and this has always added to her portfolio. She is also an avid animal lover has two pet dogs, Koko and Kota.