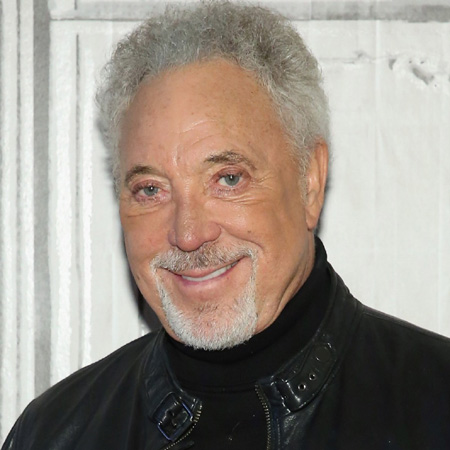 Singing legend, Tom Jones is a rock, pop, and soul singer. Emerged as a vocalist, he has been an international hitmaker over the last five decades.

He has been honored with several awards for his significant works. His hit singles include "Green Green Gra s s of Home," "It's Not Unusual," "Till," "Delilah," and "A Boy From Nowhere."

Jones was born on June 7, 1940, in Pontypridd, Wales, to a traditional coal-mining family. He belongs of Welsh nationality and is of mixed ethnicity.

His mother was of Welsh and English ancestry, and his father was of English descent. Jones is the son of, Thomas Woodward and Freda Jones.

Jones was interested in singing since his childhood days. He used to sing at a family gatherings, in his school choir and at weddings. Also, he liked to listen to music, which aired on BBC radio. He did not like school or sports.

Jones started his singing career in 1963. His voice was described as a " full-throated, robust baritone.' He began as the frontman for the band, ‘Tommy Scott and the Senators. The crowds loved the group, but as it was a non-urban area, the growth was limited.

Jones met Gordon Mills who later became his manager bringing him to London. The artist changed his name to Tom Jones; he decided to pursue a new solo career.

Signed a contract with Decca Records

Jones signed a contract with Decca Records, where he made his debut with the single, ‘Chills and Fever.’ The single was released in 1964.

His second single, the groovy and carefree "It's Not Unusual was a great hit. It peaked at No.1 on the British charts in 1963 and was an American top 10 hit as well.

Launched his TV show in the year 1969

After releasing some hit songs, he launched his TV show in the year 1969 under the title, ‘This Is Tom Jones.’ The show ran till 1971 and became internationally famous.

Jones' all-time-hit songs include "She's a Lady," "Till," and "The Young New Mexican Puppeteer," after traveling all around the world through the 70s. Jones signed a deal with ‘Interscope Records’ in 1993. He launched the album, ‘The Lead And How To Swing It.’

Also, he also became a judge on the BBC talent show, The Voice UK in March 2012 alongside Jessie J, Willam, and Danny O'Donoghue.

He appeared in a special 90-minute show, called Children in Need alongside Rob Brydon.

Tom Jones,77, is a married man and has a son. He married his childhood sweetheart, Melinda Rose Trenchard.  The couple tied their knots on March 2, 1957. They both were only 16 years old at that time. They had a son named Mark Woodward.

According to Jones, he has slept with up to 250 women a year but cites his wife as his beloved one. He has been involved in many romantic relationships with several Hollywood divas. His affairs include singer Mary Wilson, TV host Charlotte Laws, and former Miss World Marjorie Wallace.

The American actress, Cassandra Peterson has said that she lost her virginity to Jones. In the year 1987, Jones had a brief relationship with model Katherine Berkery during the US Tour. She became pregnant after the relationship.

There was a legal battle including a DNA test, and in 1989 it was declared that Jones was the father of the boy. Even though Jones is the biological father, he doesn't want to meet his son, Jonathan Berkery.

In 2009, Jones said that he and his wife, Linda were planning to move back to the United Kingdom after they resided in the US for 35 years.

"I've had a great time living in Los Angeles", Jones said, "but after all these years, we think now is the time to move home".

Jones’s wife Linda died after a 'short but fierce battle with cancer,' on 10 April 2016 at Cedars Sinai Hospital in Los Angeles. He had a difficult year after the death of his wife. The couple had a successful relationship for 59 years.

After her death of her, Jones revealed the statement, which showed love and affection towards his wife. He added that he still remembers his wife and her voice.

“I hear her voice. I see her a lot at night. When I dream that she’s still here and then I wake up and she’s not, that’s the hardest.”

Jones is a good friend of Priscilla Presley, wife of rock 'n' roll icon Elvis Presley. They had remained friends since their party days in the late 60s and 70s.

Jones was diagnosed with tuberculosis and many years later, talking about the time while he was recovering from tuberculosis, he stated;

"I spent two years in bed recovering. It was the worst time of my life."

After that, Jones began working as a laborer and a door-to-door salesman. During his early age, he was influenced by several blues and R&B singers including Little Richard, Solomon Burke, Jackie Wilson, Brook Benton, Jerry Lee Lewis, and Elvis Presley as well.

Jones is one of the most popular vocalists who emerged from the British Invasion. He stands 5 feet 10 inches tall.

He has earned a tremendous amount of money from his long music career. He has performed in more than 50 concerts in 18 countries.

In October 2005, Michael Joseph, a British publisher published his autobiography titled, Over the Top and Back.

Jones has been honored with several awards in his career. He received a Grammy Award for Best New Artist in 1966.

His other awards include an MTV Video Music Award in 1989, and two Brit Awards: Best British Male in 2000 and the Outstanding Contribution to Music award in 2003. Jones was awarded an OBE in 1999.  Queen Elizabeth II knighted him for services to music in 2006.