Timothy Darell Russ, well recognized as Tim Russ, is an American actor, filmmaker, screenwriter, and musician. The Los Angeles-based actor garnered wide fame for his popular roles in TV series like Star Trek: Voyager, Samantha Who?, and The Highwayman. He also has memorable movie appearances in Crossroads, East of Hope Street, and Spaceballs.

Tim Russ was born Timothy Darell Russ on June 22, 1956, in Washington, D.C., United States, to Walt Russ and Josephine Russ. His mother was a state government servant while his father, a U.S.Ari Force officer. He has a brother, Michael Russ, and a sister, Angela Russ.

He spent most of his childhood part in Turkey. For his education, he went to the Rome Free Academy, graduating in 1974. He received a degree in theater arts from St. Edward's University.

He also attended Illinois State University and was initiated into its Hall of Fame. As of writing this article, he is 65 years old and stands at the height of 5 feet 11 inches (1.82 m).

What Is The Net Worth Of Tim Russ?

The 65-year-old actor has ama s sed a significant amount of riches from his professional career. As per Celebrity Net Worth, he is reported to have a net worth of $6 million as of 2021.

He acc u mulates a fair amount from his albums sales, entertainment industry, and endorsements. He appeared in the musical drama film Crossroads (box office $5,899,000) in 1986. 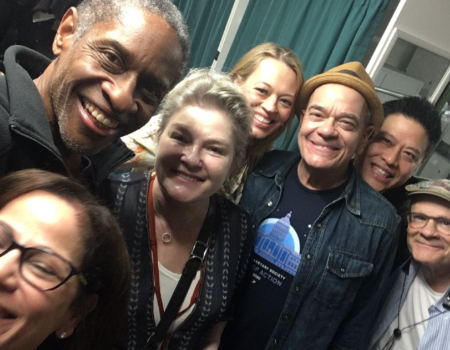 In 1994, he acted in the sci-fi film Star Trek Generation (box office $118 million and budget $35 million). He portrayed popular character Lieutenant Commander Tuvok in the UPN series Star Trek: Voyager from 1995 until 2001.

Russ has also made notable appearances in the TV series iCarly, Samantha Who?, and Trust Me. He has made guest appearances in television series such as Lab Rats, The Night Shift, Criminal Minds, 9-1-1, and PEN15.

Besides acting, he is a singer and an amateurish astronomer. He has already released five studio albums, including Kushangaza, Lifeline, and Tim Russ.

Who Is His Partner? Does He Have Children?

Talking about his personal life, 'Star Trek: Voyager' actor is not married until now. However, he and his partner Jedda Roskilly, have welcomed a daughter, Madison, born in March 1999.

His girlfriend is an author of a book called 'Bugsters.' Besides, the duo hasn't talked much regarding their relationship, and it's unknown whether they're still together or not.