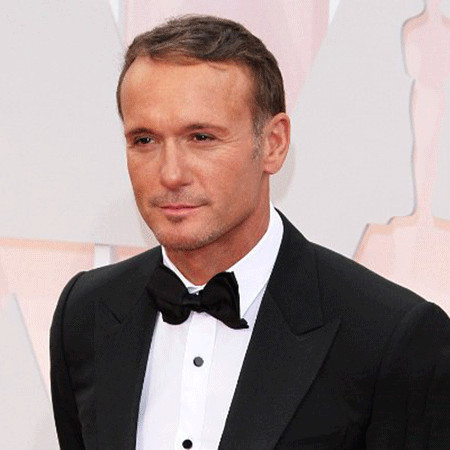 Tim McGraw is well-seated among the huge artists in the country music arena. Three-time Grammy Award winner Tim McGraw is an accomplished and world-famous country singer.

He has released fourteen studio albums among ten albums reached number one on the Top Country Album’s Charts.

McGraw has also appeared in several films and TV series including Black Cloud, Flicka, Dirty Girl and Cake Boss. In 2016, he was a key advisor in the music reality show, The Voice Season 11. He is married to another country singer Faith Hill since 1996.

Born as “Samuel Timothy McGraw” on May 1, 1967, in Delhi, Louisiana, United States to parents Elizabeth “Betty” Ann D’Agostino and Frank Edwin “Tug” McGraw, Tim McGraw is the only child of his parents. His mother was a waitress while his father was a late baseball player. Tim has a mixed ethnicity.

As a child, Tim loved sports and was a member of FFA. He went to Northeast Louisiana University on a baseball scholarship and became a member of Pi Kappa Alpha fraternity. Tim had to quit sports because of his knee injury. Tim McGraw learned to play guitar while he was in the college and used to perform frequently.

Tim McGraw followed his mother and moved to Florida and attended Florida Community College for a term where she used to be among the local bands. Tim dropped out of college and went to Nashville to pursue his career in music in 1989 after his hero Keith Whitley died.

Tim McGraw came to the attention of Curb Records in 1990. His father Tug McGraw is a man behind his success. Tim’s early days were very challenging and frustrating. His first singles and the album did not make any good but he used to get offers for performing because of his father’s fame.

In 1994, Tim McGraw released his second album, Not a Moment Too Soon, which became the best-selling country album and started his successful music career. Since afterward, Tim became one of the rising country singers in the country music.

Tim is awarded several of the prestigious music awards including three Grammy Awards. Tim McGraw was also inducted into the Italian-American Hall of Fame in 2004.

Tim McGraw's Net Worth And Charity

Tim McGraw has the total net worth of $85 million and has the annual income of $38 million, as of 2018. He is one of the richest country singers of this arena which has collected this huge fortune with his successful music career. His wife, Faith Hall’s net worth is five million lesser than his net worth i.e. $80 million.

The couple lives in a lavish home in Franklin, Tennessee. The 3152-sq-ft home was built in 1800 and features three bedrooms with four baths as well as a master suite. The couple bought the property in two separate transactions in 2000 paying $13.75 million total.

They also have a couple cars in their garage. His wife drives a Range Rover which cost $85K in the market. McGraw prefers a Land Rover Defender 90 which cost $70K.

McGraw and his wife Hall has supported in numerous charitable and philanthropical activities. They have been a part of social movements for a long time.

In June 2010, McGraw and his wife raised $2 million for The Community Foundation of Middle Tennessee in response to the flood in early May that killed 22 people and caused $2 billion in damage.

Tim McGraw is also a record producer. He is also an actor. He made his acting debut in the episode of The Jeff Foxworthy Show as Foxworthy’s Rival.

Later onward, Tim can be seen in supporting role, guest appearance and short role in different movies and television shows such as Cake Boss, Repeat After Me, Dirty Girl, The Shack and many others.

He is also a charity worker. He has been supporting different charities and foundations ever since Tim got into fame.

Tim McGraw is a happily married man. He is married to a fellow country singer Faith Hill since October 1996. The couple is very honest and faithful towards each other.

They have three children, three daughters together named Gracie Katherine born on 1997, Maggie Elizabeth born on 1998 and Audrey Caroline born in 2001. The blessed family is living together very happily.

He then began to release the albums in consecutive years. The name of his albums afterward are All I Want, Everywhere, A Place in the Sun, Set This Circus Down, Tim McGraw, and the Dancehall Doctors, Live like you were dying, let it go, Southern Voice, Emotional Traffic, Two Lanes of Freedom, Sundown Heaven Town, and Damn Country Music.