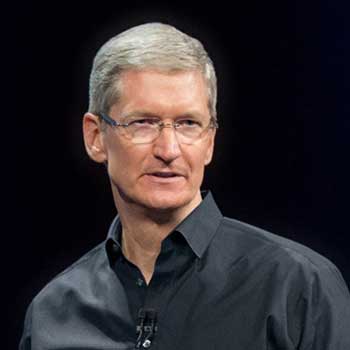 Timothy Donald Cook, an American business executive, and Industrial engineer is the current CEO of Apple Inc. He is on the board of directors of Nike, Inc and the National Football Foundation. He has also served as the Executive Vice President of Worldwide Sales and Operations and also the Chief Operating Officer of Apple Inc. before becoming the CEO in 2011 in succeeding Steve Jobs.

Tim Cook was born in the year 1960 November 1. He was born in Mobile, Alabama, to a shipyard worker father and a pharmacy worker mother. Tim is American by nationality and white by ethnicity.

Tim attended Robertsdale High School. He has earned a B.S degree in industrial engineering from Auburn University in 1982 and a master’s degree in Master of Business Administration from Duke University’s Fuqua School of Business in 1988.

After completing his master’s degree, Tim spent his 12 years in IBM’s personal computer business as the director of North American fulfillment.

Later, he became the Chief Operating Officer of the computer reseller division of Intelligent Electronics in apple inc. and also a VP of Corporate Material at Compaq. It was in the year 1998 when Tim Cook was asked by Steve Jobs to join Apple Inc. and for the first time meeting with jobs, he set his mind to work with Apple.

In the initial days at Apple, he worked as an SVP for Worldwide Operations. At the time, he brought the changes in the ways at Apple which eventually helped Apple Inc. to keep the costs under control with the company’s design and marketing savvy as well as helped in generating a huge profit for the firm.

Our teams here in Madrid and all around the world are gearing up for Friday’s launch of iPhone XR. Thanks for stopping by, @rosaliavt! pic.twitter.com/3YsBkNo8bB

As his talent and skill of managing the business and promoting strategy, Tim was promoted to the position of COO in the year 2007, and later in 2009, he became the CEO of the Apple Company as Steve was away due to his health condition. However, during that time, the major decisions were to be taken by Jobs.

Later in 2011, Steve Jobs resigned from the post of CEO and remained as the chairman of the Board of Apple’s Board of Directors and they approved Tim as the CEO of Apple Inc. Steve Jobs died the same year due to pancreatic cancer.

Following his work as the CEO of the company, he made major changes in the executive team of the firm in order to bring more success and profit to the firm. As its CEO, he began to be active in the meeting and bring out strategies.

He has worked hard for the firm. He began to focus on People, Strategy, and execution as he believes if one gets these three right, the world is a great place.

Apple began to increase its donations in Charity and in 2013; Tim hired the head of Environmental Protection Agency Lisa Jackson, to assist Apple in developing its renewable energy activities.

Tim is an unmarried man. He has never mentioned his dating life and affairs publicly. He is a very fitness enthusiast. He loves jogging, hiking, cycling, going to a gym, and work out.

He has maintained his health status and made his mind and body fit and fresh. Talking about his personal life, he is gay. In 2011, the news had come out but Tim did not choose to speak up to the public about it though he used to publicly support the rights of lesbian, gay, bisexual, and transgender.

But in 2014, he stated that he is proud to be gay and consider it to be among the greatest gifts of Gods to him. The news made him the first openly gay CEO on the Fortune 500 List. Tim is not married yet and no information is available on his gay partner of a boyfriend.

He was honored with several awards:

He has been the key interest of many people around the globe as he is in the reputed position of the world’s designated company for sure. His biography can be found on different internet sites including his articles, pictures, and videos along with Wikipedia.