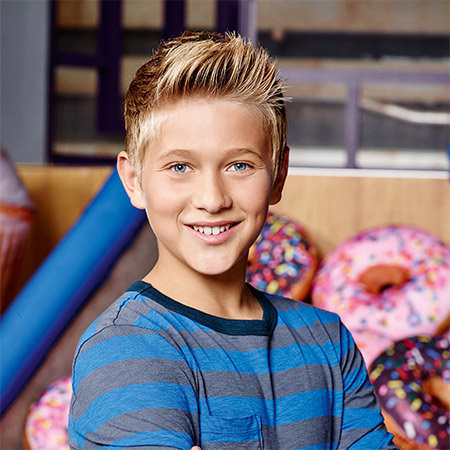 Thomas Kuc is a Brazilian-born child actor, known for his roles in 'Game Shaker' and 'The Diabolical'. He was born on 10 October 2002, in Brazil. and relocated to California as a child. It was during this time he developed his interest in acting. He was also a competitor in Gymnastic since the age of five. He has one older sister Alma, who is a gymnast. Kuc also loves surfing and skating during his free time.

Thomas Kuc landed a starring role as Hudson in the Nickelodeon's long-running hit sitcom series “Game Shaker” alongside Benjamin Flores Jr. The series is created by Dan Schneider and other starring actors are Cree Cicchino, Madisyn Shipman, and Kel Mitchell. As of August 10, 2016, Game Shaker has completed 19 episodes.

In 2015, Thomas Kuc made his feature film debut in an American science fiction horror, "The Diabolical," where he played as Danny. The movie was directed by Alistair Legrand and written by Luke Harvis and Legrand. The movie was a huge success.

Thomas Kuc has the height of 4' 11'' and the weight of 50 kilograms. Some sources claim that he have films lined up for future. He is currently living in Pacific Palisades, California. Kuc is a polyglot and able to speak Polish, Spanish, Mandarin, English, and Portuguese.