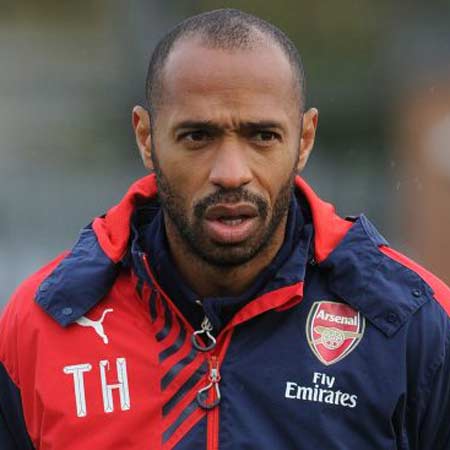 Given Thierry Henry's versatility in being able to operate as both a winger and a striker during his playing career, he also played his hands in the field of management. He is a former French professional footballer who currently works as an assistant manager of the Belguim national team. Henry played for several top flighted clubs including Monaco, Juventus, Barcelona, Arsenal and New York Red Bulls. During his extensive football career, he spent 8-years at Arsenal and became its all-time record goalscorer. He made his international debut for France national team in June 1997 and helped France win the 1998 World Cup. Henry also won both the Adidas Golden Ball and Adidas Golden Shoe following his outstanding performance in the 2003 FIFA Confederations Cup. He is the 8th richest Premier League Player.

Thierry Henry was born Thierry Daniel Henry in Les Ulis, a small suburban town in Paris called Les Ulis, on 17 August 1977  to Antoine Henry and Marylese Henry. He spent most his early childhood years in a ghetto-like neighborhood. He lived along with his family in a small apartment and his father encouraged him to play sports and invest most of his energy into athletics although the living conditions were not very supportive.

As a child, Henry used to play soccer at the local tournaments in his hometown and showed great potential, prompting Claude Chezelle to recruit him to the local club CO Les Ulis at the tender age of seven. He began playing for the Under-15 team for Viry-Chatillon, represented the club for two-year.

Following his parents' separation, Henry moved to Orsay along with his mother to join Alexander Fleming School and even there, his focus was on soccer. He was selected at the French Football Federation's Clairefontaine Academy, at the age of 14. He belongs to French nationality and ethnicity wise, he is from a mixed ethnical background as his mother is from Martinique and father is from Guadeloupe, Island.

At the academy, Thierry Henry signed an apprentice contract with the French football manager Arsene Wenger's team Monaco as a youth player. And subsequently, he made his professional debut for the club in a 2–0 loss against Nice on August 31, 1994. His solid performance in the 1996-97 season helped the team to win the club Ligue 1 title.

Under the guidance and training of Wenger, Henry was also named the French Young Footballer of the Year in 1996. The young winger scored 20-goals in  105 appearances for the club. At the beginning of 1999, he left the club and then signed a contract for £10.5 million with the Italian club Juventus.

After seven-month of joining the club, Henry was on the move again in a £10.5-million contract to join English professional football club Arsenal, reuniting with his former manager Arsène Wenge. Although his primary character is a left-winger, he started playing as a striker for the club and later became one of the most lethal strikers English Premier League has ever seen. After his first and second season at the club, he also became the team's main goalscorer as well.

The striker also helped the team to reach the finals of the FA Cup but lost 2-1 to Liverpool. He scored 24 goals in all of the league matches of the 2001/2002 season, emerging as the league's top goal scorer. He helped them to a double, winning Barclays Premier League and the FA Cup as well as received his first silverware with the club. 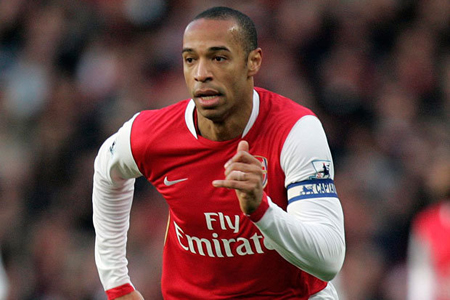 Henry's another productive season came in 2002-03, as Henry scored 32 goals in the season and led his club to another FA Cup victory where was declared the man-of-the-match in the Finals. He also became the PFA Players’ Player of the Year and FWA Footballer of the Year. He was the top scorer in the Premier League in 2004 scoring 30 goals and led the club to win the title without losing a single match.

Henry was named as the runner-up for 2004 FIFA World Player of the Year award. One of the remarkable personal achievements for Henry once again came in the 2005-06 season as he was declared the club's top goalscorer of all time and breaking Ian Wright's record of 185 goals. And during the season, he also led his team to win FA Cup but was not able to play in the final match against Manchester United after he suffered a knee injury.

Henry registered his 200th goal for his club in a winning match against Birmingham in 2006 and voted the Footballer of the Year for the third time as well. In 2007, he made his transfer to Spanish giant FC Barcelona for a transfer fee €24 million on 25 June 2007.  He made an agreement for a reported €6.8 million per season. He scored his first goal for the club in a 3-0 Champions League victory against Olympique Lyonnais.

In 2009, Henry helped the team win six trophies which included the Primera Division, Champions’ League, the Supercopa de Espana, the UEFA Super Cup, and the FIFA Club World Cup. He scored 35-goals in 80 appearances for the club. The following year, he signed a contract with Major League Soccer club New York Bulls for multiple years and scored the first goal for the club in a 2-0 win over San Jose Earthquakes.

During the MLS off-season, Henry returned to his old club Arsenal on a two-month loan deal on 6 January 2012. The same year he made his come back to the Red Bulls scoring his first MLS hat-trick for the club in a 5-2 against win Montreal Impact. He also became the highest paid player of the MLS.

On 1 December 2014, it was announced that Henry will not play further for the Red Bulls.

Thierry Henry made his international debut for France national team in June 1997 playing in the 1997 FIFA World Youth Championship. And he made his senior appearance on 11 October 1997 in a 2–1 win against South Africa.  During his international career with the France national team,  he led his team to win FIFA World Cup in 1998, UEFA European Championship in 2000, and FIFA Confederations Cup in 2003. 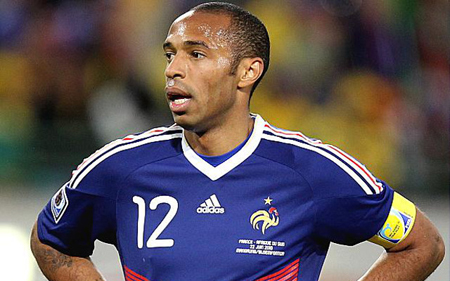 On 16 December 2014, Henry announced his retirement from the national team after the 2010 World Cup, finishing his international career with 51-goal in more than 125 appearances. Following his retirement, he stated that he would be working for Sky Sports as a pundit.

Managerial Career And Other Work

In addition to his long football career, Thierry Henry started working as an assistant manager of the Belguim national team along with head coach Roberto Martínez and fellow assistant Graeme Jones.

Besides, Henry also appeared in the 2015 box office hit movie Entourage which grossed $49.3 million worldwide against its producing cost $39 million.

Henry is also a part of the UNICEF-FIFA Squad and is an active spokesperson against racism in football.

During his prolific football career, Thierry Henry has won a number of plaudits and accolades. He was named as a runner-up for the 2003 and 2004 FIFA World Player of the Year awards. In those two seasons, he also became back-to-back PFA Players' Player of the Year. He is the first ever footballer to have won the FWA Footballer of the Year three times (2003, 2004, 2006).

Thierry Henry's Net Worth And Salary

Thierry Henry has collected a decent amount of money from his successful football career which as per celebrity net worth is around $60 million and according to TheRichest, his estimated net worth is $63 million.

It was reported that Henry purchased a New York City apartment for $14.9 million after moving to MLS in 2010. In February 2012, he demolished his $9.5 million home in London in order to build a new 40-foot fish tank. The fish tank's size is 40ft from the bottom of his house and reportedly its cost was $400,000. 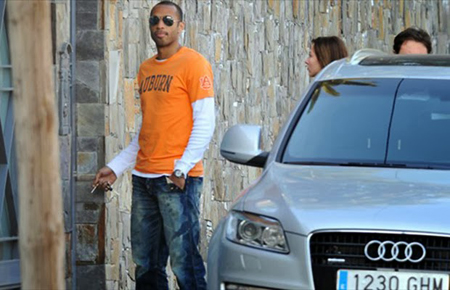 Henry is also a proud owner of Audi Q7, price ranges from $49,900 to $53,900. Throughout his career as a footballer, he has also made a large amount of money from his endorsements deal with a number of world-renowned brands including Renault, Nike, Reebok, Puma, Gillette, Pepsi, and Beats.

Henry signed a contract of £11 million with Premier League club Arsenal and an agreement with Barcelona F.C. in 2007 signing a four-year contract for nearly £7 million per season. While he was playing for his last club New York Red Bulls, he became the highest-paid player in the MLS earning $5 million as a base salary.

Thierry Henry married English model Nicole Merry, real name Claire, on 5 July 2003. The couple organized their wedding ceremony at Highclere Castle. And they became the parents for the first time after Nicole gave birth to their first child, a daughter Tea Henry, on 27th May 2005.

Upon the arrival of his daughter, Henry dedicated a goal he scored against Newcastle United as he formed a 'T' shape while celebrating his goal. Despite their loving relationship, it was announced that Henry and his wife Nicole were separating; the decree nisi was granted at the end of 2007. They finalized their divorce in December 2008 after Henry paid £8 million allegedly as a divorce settlement. 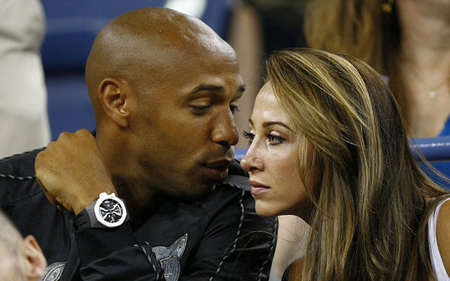 Following their divorce, Henry started dating Bosnian model Andrea Rajacic. It's been around a decade and still, the couple is together with no rumors of a break-up. They also have a son named Tristan Henry, born on August 23, 2012.