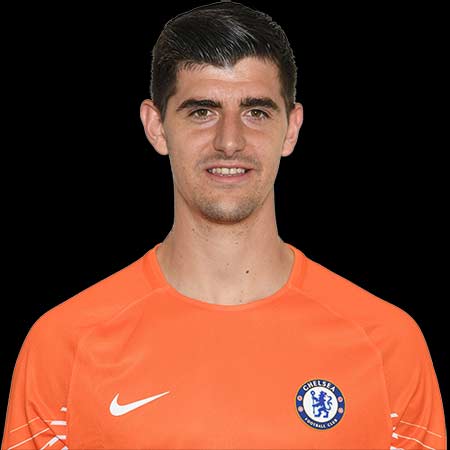 Considered a highly promising prospect in his youth, Thibaut Courtois gradually established himself as one of the best goalkeepers in the world. The footballer made his senior appearance for Belgium playing in a friendly 0–0 draw against France and became the youngest goalkeeper to play for the Belgian national team. Courtois also played for several top flighted clubs including  Chelsea FC, the Koninklijke Racing Club Genk, and Atletico Madrid.  He also became the most valuable player in the 2013 Copa del Rey Final.

Thibaut Courtois was born on May 11, 1992, in Bree, Flanders, Belgium. His nationality is Belgian and regarding his ethnicity, he is Caucasian. The footballer belongs to the family of sports personalities as his parents are former volleyball players and his sister Valerie Courtois is also a professional volleyball player who currently plays as a libero for Budowlani ?ód? and Belgium.

Thibaut Courtois was heavily involved in sports as a child and he decided to focus on football at the age of 12.

Thibaut Courtois started his football career playing for Racing Genk as a left back in 1999. At the time, he was also converted into a goalkeeper. Initially developing his skills through the Genk youth system, he made his professional debut for Genk at the young age of 16. He gained international fame following his marvelous performance in Genk's title victory in the 2010–11 season during the Belgian Pro League. As a result, he also won the Goalkeeper of the Year and Genk's Player of the Year award.

In July 2011, Courtois transferred to Chelsea signing a five-year contract for a reported fee of  €9 million. After a few weeks of joining Chelsea, he was sent on a season-long loan to Atlético Madrid and made his debut for the team in a 4–0 UEFA Europa League win against Vitória de Guimarães on 25 August.

Courtois led the team to win the 2012 UEFA Europa League Title keeping a clean sheet in the final 3-0 win against fellow Spanish side Athletic Bilbao. In June 2014, it was announced that the player would return to Chelsea. Following his come back, he officially signed a new contract for five years with the club. His first trophy with Chelsea came in 1st March 2015 after they defeated Tottenham Hotspurs in the final.

Courtois made his full international debut for Belgium playing in a friendly draw match against France.  He became the first-ever youngest goalkeeper to play for the Belgia national team. He kept six clean sheets in ten games during the 2014 FIFA World Cup qualification campaign. He also helped them to secure the spot at the 2016 UEFA Euro championship. Unfortunately, he did not play last two games due to injury.

Thibaut Courtois' Net Worth and Salary

Thibaut Courtois has earned a decent amount of money from his football career which according to some online sources is believed to be more than $5 million. As of now, he earns £100,000 per week playing for Chelsea. He joined the club in 2011 for a reported fee of £8 million. As of 2012, his annual salary was £3 million.

As per reports, Courtois bought the luxury designer mansion for $1.9 million in 2011. He is also a proud owner of Mercedes-AMG GLE Coupe which is worth around $70,500. He has collected a certain amount of money through his endorsement deal with several renowned companies as well.

In February 2014, Thibaut Courtois made headlines when Simon Mignolet called him out as his rival for the goalkeeper spot. Simon in an interview said,

"You have to know how to stay humble and respectful, and he should remember that."

In April 2018, the former coach Wilmots also accused Courtois and his father of revealing Belgian team line-ups before they disclosed it publically.

Thibaut Courtois is not married yet and is currently single. He dated the Filthy Rich: Cattle Drive star Brittny Gastineau in 2017. The couple first met on June 27, 2017, at the Sunset Tower bar where they spent three nights together.

Their relationship ended in February 2018. Prior to Brittny,  he was in a long relationship with Marta Dominguez with whom he shares two children.

Courtois' longtime girlfriend Dominguez gave birth to their first child, a daughter named Adriana Courtois on 26 May 2015. However, their relationship ended in April 2017 while Domínguez was pregnant with their second child, a son Nicolas Courtois, born after a month of their break-up.

A Colombian fan also formed a  new popular social media meme under the name Thibauting at the beginning of 2013 after inspired by Courtois' pose from a  particular save.