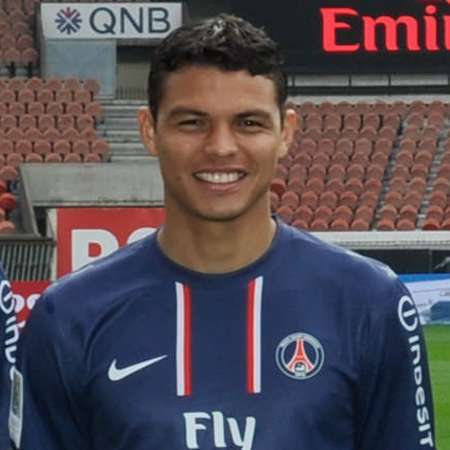 He was born on 22 September 1984 in Rio De Janeiro, Brazil. He is the captain of Brazilian national team as well as captain of his club.

Silva’s parents parted ways when he was very young and he lacked any direction in life. But after two-three years the much-awaited direction in his life appeared in the form of his stepfather who was a blessing in disguise.

He was a father who was a pillar of support lending him the hand he could trust and move ahead with. Besides his father, there were a lot of other people who helped him surmount the snag of his life and reach where he is today.

They had very less money still his stepfather would manage in his training to play football. Thiago Silva was trained with Fluminense at a young age. He played for the Rio Grande do Sul state club RS Futebal as part of a small professional contract in south Brazil.

Contemplating on his spectacular performance he was offered to debut in the first division in 2004 by the Juventude in a s sociation with whom he delivered a successful season. He had catapulted into a central defender in a small course of time from a right-winger.

He had delivered a stunning performance in Brazilian championship which earned him credentials and was transferred to Portugal where he had contract terms for five years. Silva played only for reserve team though.

He had joined Dynamo Moscow, the Russian Federation in January 2005 but hardly had he appeared in any games as he was suffering from tuberculosis preceding intense cold and tormented health.

He was hospitalized for four months. His condition had worsened and even doctors mentioned the worrisome state in which he could die if remained in the hospital for more two weeks.

His crippling lung disease painted a grim picture of his dream but he acc u mulated all his strength to combat the disease and however kept his dream alive. Silva chose to vanquish the illness over his dream and he certainly did that.

He returned to Brazil in 2006 and played for Fluminense in Rio de Janeiro. He showed mind-blowing performance earning respect and people’s affection. He helped Fluminense to leap to second place in the Copa Libertadores in 2008.

He then immigrated to Italy to join AC Milan. He played his first match as a debutant from AC Milan on January 21 in 2009 against German. The match ended with the score 2-2 and he emerged as a good defender who played for 90 minutes.

He was implicated in the squad for league games in July 2009 and has always given praiseworthy performances. He arrived at the club Paris Saint-German where his signing was valued at 42 million Euros.

He received an invitation from 2008 Beijing Olympics but he got mauled during the preparations. He has also won the French League Cup. He has won several league titles in Italy, Brazil, and France.

The legendary defender, the captain of the national Brazilian team, Captain of the French Champions he has earned all the prestigious names and has by far achieved a milestone in his career but the journey till there was not a cake walk.

He went through a lot of hardships, scourge, and adversity which has reinforced his strength and determination to succeed and emerge as a valor over life’s rough trail. He is in a relationship with his girlfriend Isabel, a Brazilian Soccer player.

He is married to his longtime girlfriend Isabel and has two sons named Isago and Iago.

Thiago Silva's net worth is $45 million at present. He earns an annual salary of $17 million from his playing career. His current market value is €10 million.