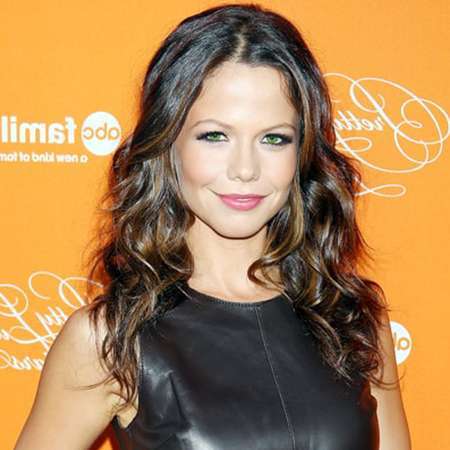 Tammin Sursok is a South African- born Australian actress and singer-songwriter. She came to limelight and gained worldwide fame for her work on Home and Away as Dani Sutherland and in The Young and the Restless as Colleen Carlton. She is also mostly known for her breakout role Jenna Marshall in the series Pretty Little Liars. She released her solo album titled Whatever Will BE, on 22 May 2005. She also appeared in several movies too.

Sursok is a married woman and is also the mother of one child.

Tammin Sursok was born Tammin Pamela Sursok on August 19, 1983. Tammin is the daughter of Daryl Sursok and Julie Sursok. She was born in Johannesburg, South Africa but at the age of 4, her family immigrated to Sydney, Australia.

Sursok was raised up in a very musical environment as her mother Julie Sursok is a  guitarist and a cla s sically trained pianist. She enrolled at Ravenswood School for Girls, in Gordon, Sydney.

Sursok studied speech and drama in her final years of school. She also went to Trinity Speech and Drama College where she graduated with high distinction. At a young age, Tammin was involved with Sydney Youth Musical Theatre. There she pursued her interests in music, dance, and acting.

At the end of the year 1999, Tammin Sursok got her first role in the Popular and longtime-running drama series Home and Away. She played the role of Dani Sutherland in the Seven Network soap opera television series. The following year, she won the Logie Award for “Best New Female Talent” and in 2002 she became a junior amba s sador for New South Wales.

In 2004, Sursok left her acting career to concentrate on her music career. By the same year, she signed a contract with Sony BMG Music Entertainment and released her first solo album under the title Whatever Will Be on 22 May 2005. The album reached to the 13 number on the ARIA Albums Chart.

Sursok moved to Los Angeles, California in 2006 and the same year made her film debut playing a bit role in the film Aquamarine. The next year, she made an appearance in the TV series Rules of Engagement as well as in the American soap opera television series The Young and the Restless as Colleen Carlton. She featured in The Young alongside Sally McDonald, Owen Renfroe, Conal O'Brien, and Casey Childs.

The actress left the series in 2009. Sursok was nominated for “Outstanding Younger Actress in a Drama Series” for her marvelous performance in the series at Daytime Emmy Awards. She starred in the Nickelodeon TV movie musical film Spectacular! playing the role of the lead singer Courtney in a high school choir and Spectacular.

Sursok recorded three soundtracks for the film. She also appeared in all eight episodes of Disney Channel Original Series Hannah Montana along with Miley Cyrus. The famous entertainment personality has gained a huge fame following her break role, Jenna Marshall in the ABC Family’s adaptation of the Sara Shepard teen mystery book trilogy Pretty Little Liars. She was cast in the series in 2010. The show is still running.

Sursok also played the role of Sarah Corso in the indie film Driving by The Braille was directed by Kristina Lloyd. In the year 2013, collaborating with singer Joe Brooks, she released a cover of Say Something is the song by American indie pop duo  A Great Big World.

Tammin Sursok's Net Worth And Earning

Tammin Sursok has made a tremendous amount of net worth from her prolific career. But the exact amount of her net worth is yet to be revealed which as per some online sources is believed to be more than $3 million.

In 2006, Sursok was a cast in the movie Aquamarine which grossed $23 million at the box office worldwide on a budget of $12 million.

Tammin Sursok is a married woman with a daughter now. She married her long-time boyfriend Sean McEwen who is also an actor, director, and producer. She and her husband McEwen tied the knots on 24th of August 2011 in Florence, Italy.

The couple welcomed their first child, a daughter named Phoenix Emmanuel on 8th of October 2013. Together, the two are also running their production company, Charlie Baby Productions. They got engaged in February 2011.

Sursok is a dog person who has three pet dogs named Tiger, Charlie, and Sydney. The couple is still together sharing the parenthood of their four-year-old daughter Phtogether. And there are no rumors of their divorce.

Her favorite colors are pink and red.