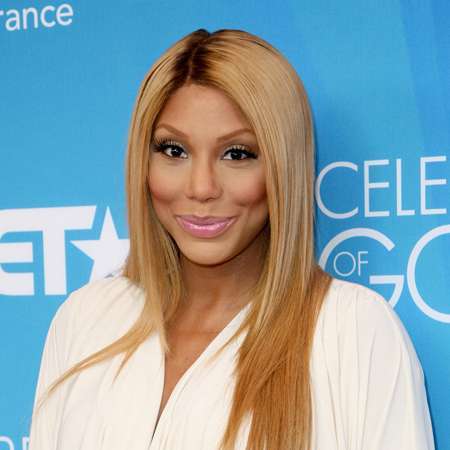 Tamar Braxton is a singer, actress as well as a television personality of American nationality known best for being the founding member of the singing group The Braxtons. She founded The Braxtons along with her four sisters in late 1980s.

She later pursued her solo career and released five studio albums as of 2018. Braxton released her self-titled debut album Tamar in 2000.

Braxton has also appeared in numerous films and TV series including her own family reality series, Braxton Family Values. She has been married twice as of 2018. She shares a son with her second husband Vince Herbert.  As of September 2018, she is dating a Nigerian singer.

Tamar Braxton was born on the 17 March 1977, in Maryland, United States. She was born to father Braxton and mother Evelyn Braxton. Her father was a pastor in the local church and mother was an amateur opera singer.
She is the youngest of six children of her parents. Her sisters; Toni Traci, Towanda and Trina are also popular singers of the industry. All four singers were members of their musical group The Braxton.

Tamar Braxton began singing since she was a toddler and entered a church choir with her sisters. She and her four sisters Toni, Towanda, Traci and Trin were singed in initially with the Arista Records in 1989. They released their first single Good Life in 1990.

It was not successful only reached at no. 79 on the Billboard Hot R&B/hip-hop singles chart. Subsequently, the Braxton dropped from the Arista Records.
They released their album So Many Ways and was released in 1996. The album peaked no. 26 on the Billboard R&B/Hip-Hop Albums chart.

In 1998, Braxton left the group to start her solo career. She then signed with the DreamWorks and released her self-titled debut album in 2000. The album also did not become successful and label dropped her from the roster.

In 2001, her unreleased songs of new ep, Try Me was featured on the soundtrack album for the film Kingdom Come. She started working on a number of songs, music videos and featuring on other artists’ projects. In 2004, she began work on her second album, and a single, I’m Leaving’, was released.

Braxton has released five studio albums to date. She released her fifth album Bluebird of Happiness in 2017.

With perseverance and will, this beauty reunited with her sisters and the WE TV reality show named Braxton Family Values was born and appreciated by the fans of the singer sisters. She is appearing in the series since 2011.

She has earned three Grammy nominations and has also been the host of The Real talk show for Fox. Her endeavors in the field are continually being appreciated by her fans.

Tamar Braxton’s net worth is $13 million as per The Richest, as of September 2018. She has earned a hefty amount of net worth from her musical and acting career. She makes a good money from her record sales, tours, reality series and other endeavors. She previously owned a lavish home with her former husband Vince Herbert in Calabasas, Los Angeles. After her divorce with Herbert, the house was listed on sale and the proceeds split between the couple.

The amount of alimony is unrevealed yet. She made $200K from sales of her album Love and War (2013). She also makes her money with her fashion line Tamar Collection (clothing and shoe line). She founded her business in November 2014. She also owns numerous luxurious vehicles. She also endorses several brands.

She has been married twice to date but both of her marriages failed. She is dating a Nigerian singer for some months. In September 2018, she went to Wendy Williams’ show, The Wendy Williams Show and revealed little detail about her new boyfriend.

I’ll describe him: he’s African, he’s in wealth finance, he’s got dreads and he’s got a really nice body.

She added that she met him a birthday party and lives in LA. She is yet to reveal his details. Previously, she was married to music producer and record artist Vince Herbert from 2008-13. She met him in 2003 and began dating him. After dating for five years, the couple married on 27 November 2008, in Los Angeles.

In March 2013, she announced her pregnancy in an episode of Good morning America. The couple welcomed their son Logan Herbert on 6 June 2013.

After nine months of marriage, she separated from him in October 2017 citing irreconcilable differences. She privately divorced from him in early 2018.

Before that, she was married to music producer Darrell Delite Allamby in 2001. He was is a songwriter and producer who worked with numerous artists. She met him while he worked on her debut album’s tracks. The couple divorced after two years of marriage in 2003.

The affair and dating history of this beauty has been talked about, as much as her career is. She was previously in a relationship with Tricky Steward previously. They dated for quite some time before deciding to move on with their lives. Her spouse is a record executive that she met through her sister. Their love that started off after meeting has grown into much more and has managed to make them extremely popular in the eyes of the public.

and has a perfectly managed body which manages to appeals to her fans. Her photos and her personal life details are available on social networking sites like the Facebook, and it seems that her success will continue to pave the way for her fame and increment in salary in the years to come.

She has also returned to the music industry after the break of thirteen years, with her second album named Love and War which was a commercial success.