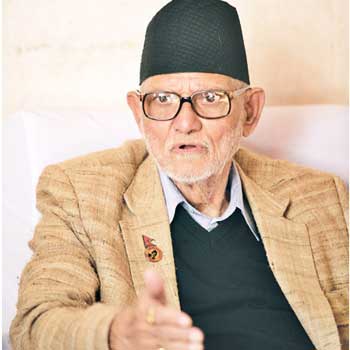 The incumbent Prime Minister of Nepal, Sushil Koirala belongs to the family tree of the Koirala family who has served Nepalese politics and Nepalese community since the generations. Sushil Koirala has been the prime minister of Nepal since 10 February 2014 and is also the President of the Nepali Congress Party since 2010 after the long reigning Prime Minister, his brother, Girija Prasad Koirala. Sushil Koirala has been active in Nepalese politics since 1954 and has served various capacities prior to becoming Nepali Congress President.

Talking about the political career since the begining, Sushil Koirala is inspired by the social-democratic ideals of Nepali Congress. He stayed 16 years political exile from Nepal in India following the royal takeover in 1960. He has also spent three years of prison in India for his involvement in a 1973 plane hijack. He was a member of the Central Working Committee of the party since 1979 and been the General Secretary of the party in 1996 and Vice President in 1998. In 2008, Sushil Koirala was appointed as the acting president for the Nepali Congress Party by the then President Girija Prasad Koirala. On September 22, 2010, after the death of President Girija Prasad Koirala, the 12th general convention of the Nepali Congress elected him as the party president. Under the leadership Sushil Koirala, Nepali Congress emerged as the largest party in the 2013 Constituent Assembly elections.

Sushil Koirala is a self educated leader, thus does not own any formal academic qualifications and certificates. He is full of knowledge through the experiences as well. Leader Sushil Koirala believes that honesty is the power of the politicians and has taken the simple life in current political circle. He is known for his simple tastes and life. Sushil Koirala was elected from Banke and Chitwan constituencies in the Constituent Assembly election of 2013 November 19.

Besides, being a political leader, Sushil Koirala has also served as a journalist. He was the editor of the Tarun, the Party’s mouthpiece. There are many articles written by him which are based on advocating the democratic socialism. As per the political reasons, he has visited several countries representing Nepal which includes Great Britain, United States of America, France, China, India and other European countries. After Sushil Koirala been the Prime Minister of Nepal, there was a huge rumor that he once wanted to be an actor in Hollywood.

Recently, Sushil Koirala has been diagnosed for having the lung cancer. He had been involved in treatment at a hospital in New York. Doctors said that he has the first stage of lung cancer. Before leaving for USA, he had admitted he used to be a chain smoker and used to chew Pan and Gutka. The doctors recommended him to go through the radiotherapy which afterwards is expected to improve the health condition of Sushil Koirala. Sushil Koirala returned to Nepal few days back after having improvement in his health going through the radiotherapy. He just defeated the death and has been active in bearing his responsibilities after his return from bering treated.