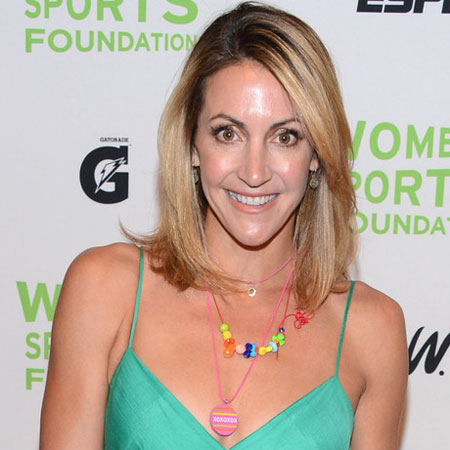 Summer Sanders, an American former champion swimmer, is currently hosting game show at HLN. She is the former Olympic champion who has several medals in her home.

Summer Sanders was born on October 13, 1972, in Roseville, California, United States of America. She was born to Bob Sanders and Barbara Hopewell. She belongs to the American nationality.

Summer Sanders’ childhood had some difficulties too and she came up with great solutions in her career as well. During her childhood days, a wild fire destroyed her home completely. She attended Oakmont High School for her education and later joined Stanford University to get her degree.

Summer Sanders has had an amazing television career too. She has worked for the mighty networks such as CBS Sports and WNBA. She has done a lot of commentary work too. She has also hosted shows such as MTV’s Sandblast and Fox celebrity reality.

Summer Sanders’ personal life has been full of ups and downs. She was first married to Mark Henderson on July 4, 1997. Mark is an Olympic medalist in swimming and met Sanders during the competition. They had an affair for some years before marriage. However, the relation did not last long and the couple went through the process of divorce in 2001.

After some years of single life, Summer Sanders was linked with Olympic skier Erik Schlopy. The couple wedded on July 30, 2005. They have a son, Robert Charles Spider Schlopy and a daughter, Skye Bella Schlopy. The family currently resides in Park City, Utah.

They are very happy together and living a perfect married life. Sanders' also told in an interview that, "My number-one priority is being a mom and a wife and sort of running my own little Fortune 500 company, which I call my household."

According to some sources, Summer Sanders has a net worth of $2 million. She has won several awards and medals as an athlete.

Summer Sanders? has a tall height of 5 ft. and 10 inches which have supported a lot in her career. She weighs 54 kg at current with her body measurements 34-25-36.