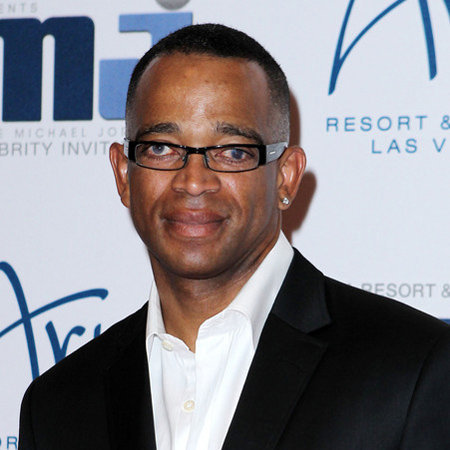 Stuart Orlando Scott is a sports journalist who was born in Illinois, Chicago, United States of America. He was born to a business man father O. Ray and his mother Jacqueline Scott worked as a decorator. Born as the eldest of four children, he has two younger sisters: Cynthia and Susan and the smallest one is a brother Stephen. When he was 7, his family moved and settled down in North Carolina. He was born in a Christian family and follows the same religion. He was born as an American by nationality and belongs to black ethnicity.

After studying for 10 years in Mount Tabor High School at North Carolina, he changed his school for the final two years and thus graduated in 1983 from Richard J. Reynolds High School which was located in Winston-Salem. A prolific defender of his school’s football squad, he was the captain of the team as well. A good sports man, he also served as the vice president of the student government. After graduation, he got a scholarship through his football talent into University of North Carolina, located at Chapel Hill. There too, he continued his outstanding sportsmanship and was also a member of the University’s Radio station operated by the students themselves. He graduated from there in 1987, holding a Bachelor’s degree in Art and Communication.

Scott was a married man, although he had some relationships and affairs in the past. He was linked to be romantically involved with couple of women, although not all those rumors were true of course. He was a husband and a father of two children, and those were with his long time wife and former girlfriend named Kimberly Scott. The couple, who were married in 1993, had two daughters together named Taelor (born on 1996) and Sydni (born on 1999). But even after having a loving family and offspring, he got a divorce from his wife in 2007, the reason still not clear. He was later believed to have been together with a Kristin Spodobalski, until his death recently.

Having trouble with is health, he had issues of not remaining fit and heathy for a long time. Whether it be his appendix problems or his different shaped eyes, he was constantly struggling with good health. After suspicion of cancer in 2010, he was diagnosed for the disease in 2011 and 2013, respectively. But despite all those successful surgery’s he never seemed to recover completely and finally in 2015 passed away. His death was highly mourned by his loved ones and his contributions are duly honored. In the February of 2015, his named is to be included in the Richard J. Reynolds High School Hall of Fame for his outstanding junior year at his school.

Scott, although his salary remains unknown was a wealthy man, and his estimated net worth in 2015 is 15 million US dollars. Half of that amount will go to his daughters and other to charitable trusts.