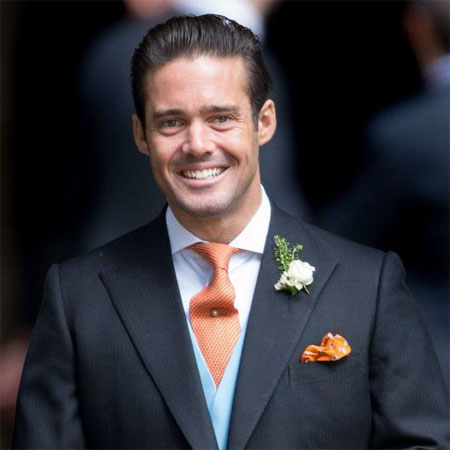 Spencer Matthews is an English socialite and original cast member of the British Academy of Film and Television Arts award-winning reality TV series, Made in Chelsea. The series started airing on May 9, 2011. She is also known for featuring on the British TV shows like ‘I’m a Celebrity…Get Me Out of Here!, 'The Jump,' and 'The Bachelor.'

Spencer Matthews was born Spencer George Matthews on August 6, 1988, in London, United Kingdom. The youngest of three siblings, Matthews, is the son of landowner and entrepreneur, David Matthews and artist, Jane Spencer Parker.

Following his graduation from Eton College, Matthews attended the University of Southern California and studied Cinema and TV. Regarding his ethnicity, Matthews is a White British (Caucasian) and belongs to British nationality.

British Socialite Spencer Matthews began working at Icap Currency Brokers as a public relations manager, and foreign exchange trader during the initial phase of his career. He came into the limelight only after appearing on the E4 reality show, Made in Chelsea.

Matthews wrote his autobiography in 2013 under the title, Confessions of a Chelsea Boy. He won the fourth series of the Channel 4 reality series, The Jump on March 12, 2017.

Spencer Matthews is not married yet. However, Matthews is dating his long-time girlfriend, Irish model, Vogue Williams. The couple met each other on the sets of The Jump for the first time in 2017; they have been dating ever since. Matthews won thousands of hearts when he appeared on Channel 5 series, The Bachelor, in 2012, in which 24 single ladies competed for his attention.

Spencer eventually selected Khloe Evans to be his girlfriend, but their relationship couldn’t last long. Pippa Middleton became Matthews' sister-in-law on May 20, 2017, when she married his brother, James.

Spencer Matthews is one of the successful reality TV personalities in Britain. He is also an author. Matthews has earned a good amount of money from his prolific career. As of 2017, Matthews’ net worth is estimated to be more than $3.8 million. He is 5 feet 11 inches tall.