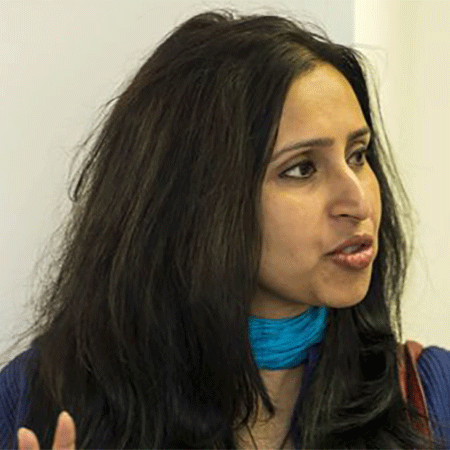 Shoma Chaudhury is a widely respected senior journalist and political commentator in India. She is one of the founding members of the Tehelka magazine and former managing editor. She is a literal critic, who was also the Editor-in-Chief of Catch News, a multimedia digital platform up until 28 Feb 2016. Her nationality is Indian. She has served as one of the judges of the Vodafone Crossword Book Award in 2006.

Shoma Chaudhury was born in Bengal, India as Suparna Chaudhury. She attended St. Helen’s Convent, Kurseong and La Martiniere School, Kolkata. She then got enrolled in Lady Shri Ram College, University of Delhi, graduating with a Bachelors of Arts in Honours. She completed her post graduate from University of Delhi (South Campus). She currently resides in New Delhi with her two sons.

Shoma Chaudhury started her early career by joining Doordarshan, one of the largest broadcasting organizations in India, directing more than 40 weekly television shows on books and writers. She then began her career in journalism as a Book Editor at ‘The Pioneer’. After that, she moved on to India Today, before joining the Outlook News Magazine.

Shoma Chaudhury joined Tehelka, an iconic Indian weekly newsmagazine, acclaimed for its investigative and public interest journalism, as Director of Special Projects and Features Editor and went on to become its Managing Editor. On 21 November 2013, Shoma was criticized publicly in the media because of the way she handled a complaint of sexual assault by a young woman journalist against the Tehelka’s founder, Tarun Tejpal.

Being a prominent voice on women issues, Shoma Chaudhury was criticized by the media and some colleagues for biasing the case on behalf of her own magazine. On 28, November 2013, she resigned from her post as the managing editor of Tehelka.

Shoma Chaudhury is also a literary critic in India. She was one of the judges of the Vodafone Crossword Book Award in 2006. She engages in public debate through platforms like the Jaipur Literature Festival and Tehelka Think Fest. She has also been featured on the Riz Khan Show on Aljazeera. On 4-5 April 2013, she became a panelist at the “Outcry in India” discussion at the Women in the World Summit.

Shoma Chaudhury is known for criticizing the current state of Indian media. She marked the state of journalism in India as “pathetic” as it had become “a corporate rather than a political act”. She was critical of the "focus on advertisement revenue" rather than public interest. On top of that, she added, “journalism has thus been undervalued, and this needs to change”. She has been awarded the Ramnath Goenka Excellence in Journalism for Film and Television and the Mumbai Press Club Award.

Shoma Chaudhury’s personal life is seldom shared in the media. She is from Bengal, but resides in New Delhi. Her ethnicity is Indo-Aryan. She is married has two sons, but information regarding her age, husband and son are kept private to herself. Her net worth is probably in thousands.