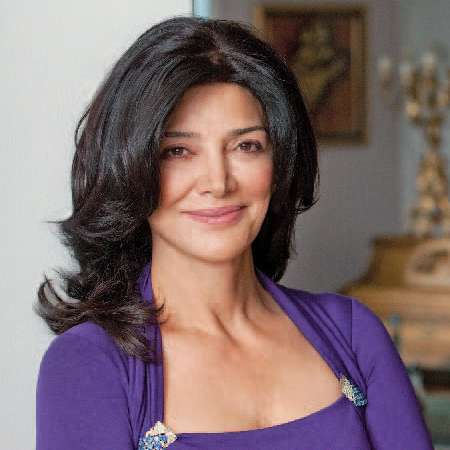 Iranian-American actress Shohreh Aghdashloo is known best for her portrayal of various roles in television series and on several movies.

She was born Shohreh Vaziri-Tabar on 11th May 1952, in Tehran, Iran. She is the daughter of Effie (née al-Sadat)and Anushiravan Vaziri Tabar. She has a Bachelor’s degree in International Relations which she obtained after she, moved into England and she pursued her career in acting when she was in Iran and also after she moved into Los Angeles.

Shohreh’s very first film role was for the movie entitled The Report, which was an Iranian movie. The movie was the winner of the Critics Award at the Moscow Film Festival.

She appeared next on the Iranian movie Shatranje Bad which too was a success and was screened on film festivals around the world. Both of these films were banned from being showcased in her home country. The movie Sooteh Delan made her plummet into fame and she became known as one of the leading actresses of Iran.

After her career in Iran was established, Shohreh moved into England to further pursue her career at the time of the Iranian Revolution. Subsequently, she moved into the U.S. and became a U.S. citizen.

She played minor roles in television and on several movies after which she was critically acclaimed for her role in the House of Sand and Fog. This role brought her a nomination for the Academy Award for Best Supporting Actress. The HBO original miniseries entitled House of Saddam (2008) also portrayed her. This role led her to bag a Primetime Emmy Award for Outstanding Supporting Actress in a Miniseries or Movie.

Her other film roles include acting in Gozaresh, Twenty Bucks, Surviving, America So Beautiful, Maryam, The Exorcism of Emily Rose, Babak and Friends, American Dreamz, The Lake House, The Nativity Story, The No Game, Percy Jackson, Rosewater, Last Knights and many more. She has acted on many movies which are the remaking of various books.

Shohreh Aghdashloo's Net Worth And Salary

She is also active on social networking sites. She is active on Twitter and Instagram with thousands of followers.

Aghdashloo had been married to painter Aydin Aghdashloo when she was 19 and he was 31 years of age on the year 1972. Despite the disinterest of her family, she started attending workshops and this led to the sourness in her marriage.

After their divorce in 1979, she moved into England. After pursuing her career in acting she married actor/playwright Houshang Touzie on 1987. Their daughter Tara Touzie was born in 1989. Shohreh has now been involved in acting in her husband’s plays.