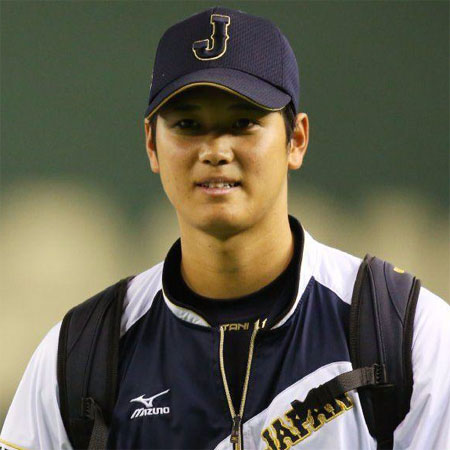 Shohei Ohtani, the native of Japan is a professional baseball pitcher and outfielder for the Los Angeles Angels of Major League Baseball (MLB).

He is one of the most talked about players on the major league offseason and is only 23 at present. Also, he is best recognized as the fastest Japanese pitcher who has secured NPB history at 165 kilometers per hour (102.5 mph).

Shohei Ohtani was born on July 5, 1994, in Japan to a father, a corporate league baseball player, and mother, a badminton player.

He attended Hanamaki Higashi in Iwate Prefecture and before he turned into a professional baseball player, he competed in 18U Baseball World Championship in 2012. The same he stated that he would choose a career in Major League Baseball instead of turning professional in Japan itself.

As far as his nationality is concerned, he is Japanese and belongs to East Asian ethnicity.

Shohei Ohtani's career started when he moved to Los Angeles to participate in the major leagues after he completed his high school when he was 18. He first played the right-fielder in the Hokkaido Nippon-Ham Fighters' season-opening game on March 29, 2013. Later, the same year, he got selected for the 2013 All-Star Game for a Pacific League roster spot and finished the season with a 3-0 record in 11 starts as a pitcher.

Following Kikuo Tokunaga, Shohei Ohtani was the second player to be drafted to be used as a pitcher and a position player for the team and was the first to start in both roles. Also, he received 4 of the 233 votes for Nippon Professional Baseball Rookie of the Year Award (Pacific League) 2013.

In 2014, Ohtani played as a pitcher and outfielder, double-duty, utilizing his impressive batting skills and strong throwing arm. Being a hitter, he batted 274 with 28 extra-base hits which included 10 home runs with 31 RBIs, and he batted a .842 on-base plus slugging percentage in 212 at-bats. Similarly, as a pitcher, Shohei Ohtani hit 11–4 with a 2.61 ERA in 24 starts and struck out 179 in 155.1 innings.

The same year, September 7 he hit a home run to straightaway center at Kyocera Dome which made him the first Japanese player to reach double digits in both home runs and wins. On October 5 in a match against Eagles, Shohei recorded the fastest pitch by a Japanese pitcher in an official game where he tied with Marc Kroon's all-time record for NPB pitchers. Also, he threw a fastball which got registered on 162 km/h (101 mph) on the stadium radar gun and shattered Ginji's bat in half.

In between the postseason, he got selected and became a member of the national team and participated in the Suzuki All-Star Series. In July 2014 Mazda All-star Game, he threw a 162 km/h (101 mph) fastball at the end of the 1st inning which became a new record within his first two years in NPB.

Further, he led the league in wins and won percentage with a 15-5 record in just 22 starts, and his 2.24 ERA and completed 5 games and 3 shutouts which were considered to be best in the league.

In 2016, he broke out into the season as a hitter and hit 22 home runs in 104 games and 382 plate appearances. Also, he won the best Nine award as a pitcher and won the Pacific League MV for his performance as a pitcher.

Ohtani made his Best Nine as the top DH and as the top pitcher in the PL. He also topped 4-time Cuban MVP Alfredo Despaigne at DH and was also the runaway winner of the 2016 Pacific League Most Valuable Player Award, getting .253 of 254 first-place votes.

In September, it was announced that he would ask to post at the end of the season so that he would play in Major League Baseball in 2018. Unfortunately, it couldn’t happen as he underwent surgery on his ankle in the early October. Also on December 13, it was revealed that he was diagnosed with a first degree UCL sprain in his elbow which got him to receive a platelet-rich plasma injection to treat the pain. On December 8, 2017, he signed a six-year contract with Los Angeles Angels.

As believed, the 23-year-old baseball player is possibly single. As he is at the peak of his career because of which he might be too busy focusing on his profession at the moment.

As reported the 23-year-old Japanese star who signed a six-year contract with Los Angeles Angels would have an estimated net worth of $200 million by the time he will reach 30. But in contradict to that, he is being paid the lowest that any of the league is allowed to pay.

The Los Angeles Angels stated to pay him a minimum salary of $545,000 per year with a one-time signing bonus of $2.3 million.

Also, some sources claim that if he leaves Japan and signs a Major League Baseball team after this season, it would cost the 23-year-old pitcher and outfielder more than $100 million (U.S.).

Though he was prized as both a pitcher and hitter in the Pacific League MVP, he will be under restrictions in MLB’s new collective bargaining agreement, signing bonus would be limited to about $3 million to $4 million.