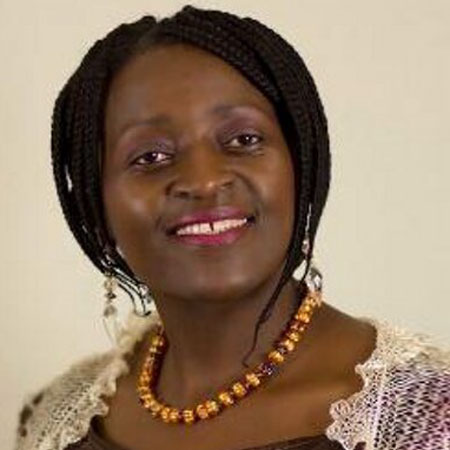 Shingisai Suluma is a Zimbabwean Christian singer, worship leader, and songwriter. Well recognized for her songs related to the Christian religion.

Suluma was born in Gweru, Zimbabwe on 28 February 1971, to Christopher and Dorcas Chadoka. She also has a sister. As their parents were musically-apt and sang in church, Suluma, and her sister were also made to sing in church during their childhood.

When she was at the age of seven, Suluma performed at the national conference of her church and later at her age of seventeen, she was choir leader of Braeside assembly Zimbabwe Assemblies of God Africa.

Though Shingisai Suluma was born in Gweru, but she is originally from Mutasa, Manicaland. Suluma's ethnicity is black and holds Zimbabwean nationality.

Suluma's career began since her childhood when she started performing at the age of seven. She recorded her first album in the year 1955 when she was in England for her university. She says her friend's encouragement and insistence made her release her first album Zvanaka.

Later, she recorded several albums some of them including Zvanaka in 1955, Huyai Ihse Jesu in 1998, Mumako in 2000, Nokuti Wakanaka in 2002, and Rwendo in 2013. She has also won several awards during her career time including National Arts Merit Award for the Outstanding song- Nanhasi, and Zimbabwe Music Awards ( 3 times ) for best female Gospel.

Besides her music career, Suluma is a still life and textile artist who got trained in Surrey, UK. She also spent several years teaching in high schools in Harare, Zimbabwe.

Shingisai Suluma is married to Stephen Suluma. They met each other for the first time in a singing group and since then they are together and spending their life in joy as her husband is also a singer, musician, and songwriter.

The couple has two children together Tashinga, 11 years old and Tiara, 5 years old.

The reason behind Shingisai's present success is none other than her husband Stephen Suluma, In almost every song of Shingisai's, there is a backup help of her husband either in lyrics or in music composition. Her husband is also a producer for her albums as he began producing since her second album.

Besides her affairs, Suluma's one of the favorite music instrument is guitar, whereas she also tried playing it and found very difficult not soo much but she loves her nails and she felt hard pulling up the strings.

Later she started playing Mbira-  which also hurt her nails but not as much as the guitar. She learned this instrument to bring the original flavor of Zimbabwean music to American Audience.

Suluma is very much afraid of mosquitos as it is her most hated insect. She literally hates mosquitos bites as she said in an interview " I think I have been stung by mosquitos more than any other person I know.

Shingisai Suluma earns a heavy amount of money from her various career such as singing, songwriting from her teaching sessions and also her husband being involved in the music industry since she joined.

We can clearly assume that she has a lot amount of net worth also, however, her exact income and net worth is not given in any sources and interviews.