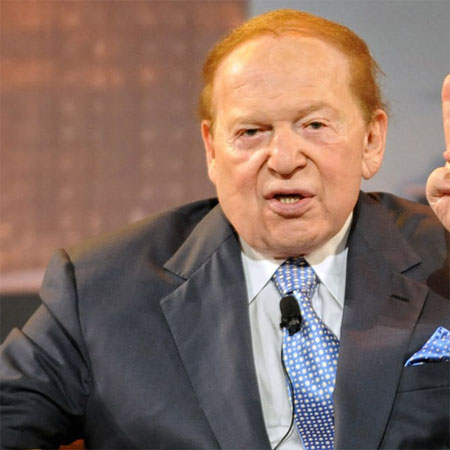 Born in Boston, Ma s sachusetts, Sheldon Adelson started his career at very early age and became an entrepreneur. He founded several successful businesses which include the computer trade show COMDEX in the 1970s. In addition, he also built casino resorts in Las Vegas and Asia and thereafter Adelson ventured into politics, generously supporting Republican causes and candidates. Similarly, in the year 2007, he was considered as one of the third-richest people in the United States with the net worth $26.5 billion.

Sheldon Adelson was born Sheldon Gary Adelson on 4 August 1933 in Boston, Ma s sachusetts, United States. He was the son of Arthur Adelson who drove a taxicab and sold advertisements and Sarah (nee Tonkin) ran a small knitting shop.

He was born in a low-income family and raised in the Dorchester neighborhood of Boston. He attended the City College of New York majoring in corporate finance but did not graduate.

Adelson started working at an early age by selling newspapers and at the age of 12, he owned his first business, selling toiletries. At the age of 16 in 1948, he borrowed $10, 000 from his uncle to start a candy-vending-machine business. After discharged from the army, he then started another business named De-Ice-It, which sold a chemical spray.

Later in 1960, he started a character tours business and by the time he reached 30 he became a millionaire. Soon after the decline of the stock market, Adelson bounced back in the early 1970's as real estate broker.

The year 1979 was marked as the life-changing year for Adelson as, during that time, his business with the Computer Dealers Expo, or COMDEX really took off. With this success, he along with his partners bought the Sands hotel and casino in Las Vegas from Kirk Kerkorian in 1989. In 1990 he opened the Sands Expo and Convention Center which was one of the largest privately owned convention centers in the USA. In 1995 Adelson sold COMDEX to Son Masayoshi's Softbank Corporation of Japan for $862 million where Alderson's share was over $500 million.

In 1996 Adelson destroyed the Sands and built the towering Venetian Resort Hotel Casino. Despite legal and contractual battles with unions and contractors, the resort opened in 1999 and was successful. Following the success of the Venetian, Adelson was presented with an offer he could not refuse.  He got an opportunity to open another Venetian casino resort on the Chinese island of Macao, which as of 2018 had become the center of a huge Asian gambling market.

In 2006, he was awarded a hotly contested license to construct a casino resort in Singapore's Marina Bay. Marina Bay Sands Hotel and Casino initiated in 2010 at a rumored cost of $5.5 million. It includes 2500 luxury hotel rooms, several swimming pools, nightclubs, the Shoppes, places for Sands Live concert series.

Adelson is also involved in other activities which include Israeli Press in 2007, She founded a free newspaper, Israel Hayom (“Israel Today”). In 2015 he purchased the city’s largest daily newspaper, the Las Vegas Review-Journal.

Sheldon Adelson's net worth is 37.2 billion USD as of 2018. Las Vegas Sands Corp. more than doubled Chief Executive Officer Sheldon Adelson's pay to $26.1 million after the casino operator rejiggered his compensation as part of a new contract. As of 2017, he received a $12.5 million cash bonus and $5 million in salary.

In 2007, he was considered as one of the third-richest people in the United States making $26.5 billion as per the Forbes. He owned a fleet of private jets through Las Vegas Sands. On 2 January 2017 Adelson's Airbus A340-500 jet set the record by making the longest flight ever leaving the airport by flying nonstop to Honolulu, Hawaii on way of the Arctic Ocean.

In the year 2000s, he started to lend his influence and wealth to political candidates of his liking. Basically a Democrat, Adelson became a Republican as his wealth increased. In 2004 he contributed $250, 000 to the second inaugural of George W.Bush. In 2010, Adelson donated $1 million to American Solutions for Winning the Future, a political action committee supporting the presidential campaign of Newt Gingrich. In 2012 election he spent $93 million.

Talking about his charity he has given millions of dollars to various charitable organizations, which include medical research, addiction clinics and Birthright Israel, an organization that finances tours of Jerusalem for kids. His wife and he has also donated to the Museum of Holocaust Art, and Holocaust Martyrs' and Heroes' Remembrance Authority.

Similarly, he also founded the Adelson Family Charitable Trust, which is expected to donate $200 million to Jewish and Israeli causes. He gave $5 million to Donald Trump's inaugural committee in 2017, which is reportedly the largest donation in U.S. history.

Sheldon Adelson has been married twice. Adelson first married to Sandra Adelson. But the exact date is not revealed yet. Together they have three children; Mitchell, Gary, and Shelley whom Sheldon adopted when they were young. In the 1970s Adelson used to live in Ma s sacwithhusetts with his first wife and three children. Unfortunately, they got divorced in 1988.

On the following year, he met Miriam Farbstein Ochshorn, a noted medical doctor on a blind date. In 1991, they tied a knot. She was previously married to a Tel Aviv physician, Dr. Ariel Ochshorn. She has two daughters with him. Ochshorn founded a substance abuse center and research clinic at Tel Aviv's Rokacch Hospital and in 2000 the couple opened Dr. Miriam and Sheldon G. Adelson Research Clinic in Las Vegas.

In an interview with Fortune, Magazine Ochshorn has spoken about her life-long work, saying that,

As of now, he is living a happy married life with his wife and children in Las Vegas, Nevada, United States.