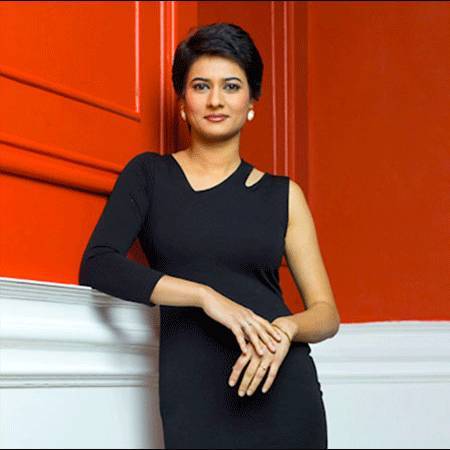 Shaili Chopra was born on 21st July 1981 in Jalandhar, India. She is an Indian business journalist, entrepreneur, as well as an author. She is better known for her work as a business journalist at NDTV- profit and ETNOW. She has twelve years of experience in anchoring, writing and also in reporting. Her father is Anil is a retired fighter pilot from Indian Air Force and her mother is Suman. She is of Indian nationality.

Shaili Chopra has completed her schooling from Air Force Golden Jubilee Institute which is located in New Delhi, India. She has finished her master’s degree from The Asia College of Journalism from Chennai in Broadcast and Television. She was trained in broadcast with the BBC at journalism school. She has also worked with ETNOW, CNBC and NDTV.

Shaili Chopra has worked with NDTV 24 x 7 as a Markets and Corporate Affairs Editor as well and NDTV Profit as the Senior News Editor- Corporate for more than five years. After that, she has worked with ET NOW for three years. She has also covered international events like [email protected], G-20, India Economic Summit, The Bretton Woods Conference 2011, and the World Retail Congress. By the magazine named Impact Magazine she was named as one of the India’s 50 most influential women in media, marketing, and advertising.

Currently, Shaili Chopra is busy in launching her second book named ‘The Connect: Politics’. The book has got a positive response from the public. Her first book was launched in 2014, 15th December named When I Was 25: The Leaders Look Back. She has her own blog where she posts about her work. Her blog receives traffic of 3000-4000 users per day.

In 2007,  Shaili Chopra has won the News Television Award for the Best English Reporter across India. Later in 2008, her business- golf show named Business on Course won the Best Show Award. Again, in 2010 March Chopra has won the Best Business Anchor Award and also was felicitated with FICCI’s Woman Achiever Award. In 2012 she was also awarded the Ramnath Goenka Award for Excellence in Business Journalism at the Indian Express RNG Awards.