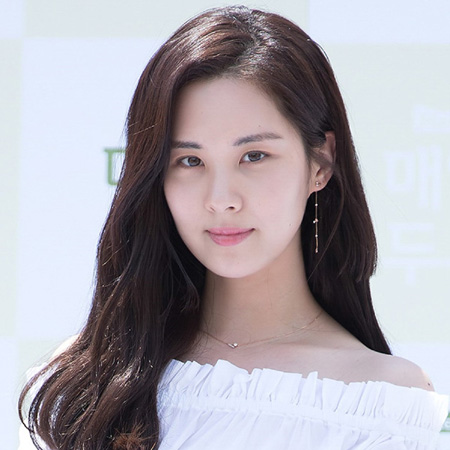 Seohyun is a South Koren actress and singer, well known as the member of a girl band, Girl's Generation, once was one of the best-selling artists in South Korea.

Seohyun was born on 28 June 1991 in Seoul, South Korea. She is the only child in the family. Seohyun's mother was a chairperson at piano school, and her mother made her learn how to play piano, traditional drums, and violin during her childhood days.

She is a graduate of Jeonju Arts High School in 2010, and went on to major in theatre acting and graduated from Dongguk University in 2014, achieving awards at the graduation ceremony.

Seohyun also learned skating and horseback riding in her early days. Her parents were not so supportive for her to become a celebrity; however, she called them as the people who helped Seohyun to pursue her career by giving her opportunities to experience various things.

When Seohyun was in fifth grade, she was discovered by a talent scout in a subway train. In an audition, she sang children's song at S.M Entertainment, later was accepted as a trainee.

Seohyun's career began on 2007 August, when she made her debut album, as the youngest member of the girl band called Girls's Generation. The group significantly achieved much fame after the release of their most hit song 'Gee.'

Her early solo efforts mostly include songs recorded for original soundtracks and side projects. Though the group did not gain high commercial success, Seohyun's duet called 'JjaLaJaJJa,' with Joo Hyun-mi, a Veteran singer was appreciated.

The duet song made them earn a nomination for 'Trot Music of the Year,' at the 2009 Mnet Asian Music Award. From 2010 to 2011, Seohyun made her appearance in MBC's variety show We Got Married 2, along with CNBLUE's Yonghwa.
In April 2012, a Girl's Generation nickname  TTS was formed along with Seohyun and member Tiffany and Taeyeon. The first album EP, Twinkle, gained a huge success and also became the eighth highest selling album in South Korea.
Besides singing with the girl group, Seohyun became more interested in writing lyrics. So co-wrote the songs 'XYZ,' 'Baby Maybe,' and also wrote a full song for 'Dear Santa,' and 'Only U.'

In the year 2013, Seohyun acting career started when she featured in a small role in SBS's drama, Passionate Love. She also portrayed as Han Yu-rim, who is a veterinary student and first love of the-the man who dies in a car accident.

Seohyun described herself as someone who likes both acting and singing, started to improve her interest in musical theatre. Seohyun named the musical actress, ock Joo-Hyun, later became her mentor and influenced her too.

Seohyun made her first theatre appearance in the musical, Moon Embracing the Sun, which was from the novel of the same name. She portrayed the lead role as Teon-woo, the daughter of a gentle family who has a love relationship with the king and his brother.

Later in 2015 January, Seohyun was featured in the role of Scarlett O' Hara in the Korean version of Autant en emporte le vent. She gained encouraging feedbacks for her efforts in the movie.

In 2016, Feb-June, Seohyun was featured in the Korean version of the musical Mamma Mia. She portrayed a character named Sophie who is a twenty-year-old bride-to-be, who is in a hope to find her father on her wedding day.

Seohyun's next appearance as a supporting role in Chinese romantic film, So I Married An Anti-fan and SBS historical drama, Moon Lovers: Scarlet Heart Ryeo.

Recently in August, Seohyun was the third Girl's Generation member to release her solo album with her extended play called Don't Say No, which was published on 17 January.

Tamar Herman from Billboard noticed the album presented with a new maturity to the singer. Her song 'Don't Say No peaked at number one for the first time on the South Korean Gaon Album Chart.

In the same month, she also featured as the female lead, a jewelry designer named Lee Ruby, in a web-drama titled Ruby Ruby Love. In Feb, she started hosting her own reality television show 'How's It Like Living Alone.

Seohyun is whether in a relationship affair or not; it is yet to be confirmed. In an interview when she was asked about her boyfriend she said she has a boyfriend. However, Seohyun has not revealed details regarding her boyfriend and affairs till date.

Seohyun earns an enormous amount of money from her hugely successful career as an actress and singer, as she has made appearances in several movies, television series, and reality shows. She has also released some hit songs which has made her famous.

She has a decent amount of net worth as she is living a celebrity life in luxury.