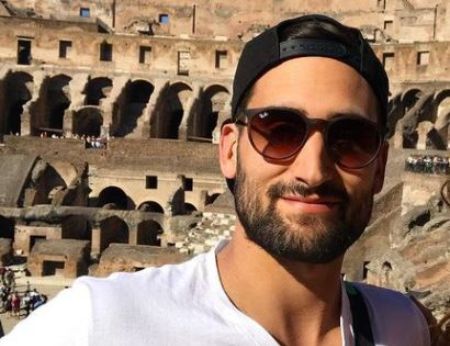 Famous as Miguel on the television series Schitt's Creek, Scott Cavalheiro is a Canadian actor and producer. He is also known for his performance in Good Witch, The Indian Detective, Mary Kills People, and Christmas with a View.

What Is Scott Cavalheiro's Age?

Scott Cavalheiro was born on June 18, 1987, in Canada, under the birth sign Gemini. At the time of this writing, he is and he stands at an average height of 5 feet 4-inch or 162 cm tall.

Scott is a Canadian by nationality while there is no any information available on his ethnicity. As per him, his parents are very supportive; however, not much is revealed about his family background.

What Is He Popular For? His Movies & TV Shows

The Canadian actor has been contributing to the entertainment industry since 2008. Following her debut on the television series Body Language, she initially appeared in Forbidden Science, Ghostly Encounters, Daylight Savings, Flashpoint, and Anything Goes.

In 2017, Scott first came into the limelight as Rocco Farinelli on the television mini series The Indian Detective. The followibg year, he received more attention for her role Miguel on the TV show Schitt's Creek.

Additionally, his other notable acting credits include The Bird Men, The Scarehouse, Space Janitors, Lost Girl, On the Twelfth Day of Christmas, True Dating Stories, Ransom, and Love of My Life. Between 2019 to 2021, he portrayed the role of Adam Hawkins on the TV series Good Witch starring Catherine Bell, Bailee Madison, James Denton, Catherine Disher, and Anthony Lemke.

Cavalheiro is also a part of Avocado Toast the series, Anything for Jackson, The Wedding Planners, Hudson & Rex, Mary Kills People, No Sleep 'Til Christmas, Christmas with a View, In Contempt, and Happy First Birthday Lucretia. As of now, he completed the shooting of his upcoming film titled You Don't Know Dick.

What Is Scott Cavalheiro's Fortune In 2021?

As per IMDb, Schitt's Creek's actor has almost 54 acting credits, 8 producing credits, and 3 writing and directing credits under his name. Turned professional in 2008, Scott Cavalheiro is believed to have a net worth of $1.1 million in December 2021.

The 34 year old Cavalheiro is currently married to Claire Stollery. As per reports, the couple met for the first time on the set of the Canadian Sitcom, Satisfaction.

After their second meeting a a  film festival, they exchanged their contact info. Attracting each other with their grounded nature, the duo first went out on July 2013.

After dating his actress wife for more than 4 years, Scott finally walked down the aisle with the love of his life on August 2017. Currently, he is living a blissful life in Toronto with his life partner.