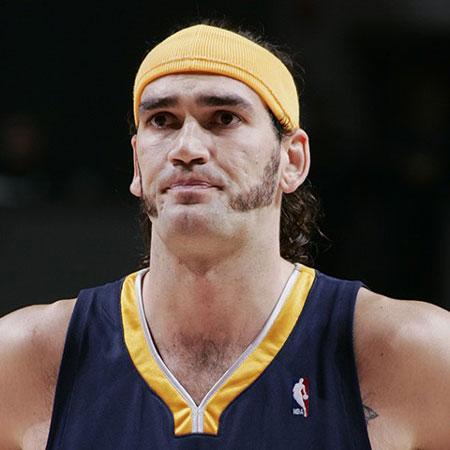 Scot Pollard is a famous former American professional basketball player. He played eleven years in the National Basketball Association (NBA) and often played from the center and power forward position.

Pollard is also an actor who has appeared in ‘Axeman at Cutter’s Creek’ and ‘Jayhawkers.'

Scot Pollard was born as Scot L. Pollard on 12 February 1975 in Murray, Utah. He belongs to white ethnicity and holds an American nationality.

Pollard is born to Marilyn Stout Pollard and Pearl Pollard who is a former University of Utah basketball Player. He grew up with his siblings, Alan Pollard, Carl Pollard, Lyne Pollard, Mark Pollard and Neal Pollard in San Diego & Kennewick, Washington.

Pollard joined the University of Kansas where he obtained a degree in education in 1997. During the time in University, he was the 19th pick of the 1997 NBA Draft, selected by the Detroit Pistons.

Shortly after playing for team Celtics, Pollard retired from NBA.

Besides his playing journey, Pollard has also hosted  ‘Planet Pollard’ on the Comcast Sports Net. On October 3, 2014, it was announced that he would join Indiana Pacers radio crew.

Pollard is also an actor who has appeared in 2013 horror film ‘Axeman alongside Tiffany Shepis and Elissa Dowling. The next year, he appeared as B. H. Born in the film Jayhawkers.

Scot Pollard married to Dawn Pollard with whom he has a baby boy born on May 2, 2016. Recently Pollard posted on Facebook where he was spotted spending quality times with his family.

They are engaged in the community and support the Indianapolis Zoo by serving on the Honorary Committee for Zoobilation, presented by Indianapolis Power & Light Co.

Pollard’s father, Pearl Pollard died due to a heart attack on Monday, October 28, 1991, in Solana Beach at the age of 54.

Once Pollard was rumored to appear on the hit reality television series ‘Survivor.'

Pollard suffered a controversy when he said, ‘Hey kids, do drug’ looking at the camera during a 20-second timeout. He has also apologized for the incident.

Scot Pollard has earned a huge amount of salary from his successful career. His current net worth is around $38 million.