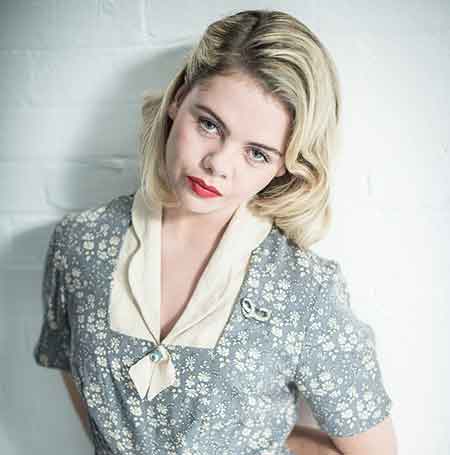 Irish actress, Saoirse-Monica Jackson is best known for her role Erin Quinn in British sitcom, Derry Girls. She debuted in films in 2016 from the Sky One series The Five. The same year, she featured in the Irish Independent magazine as the next Irish star actress.

Saoirse-Monica Jackson was born on November 24, 1993, in Deery, Ireland. Her birth sign is  Sagittarius which defines her personality as Generous, idealistic with a great sense of humor. She learned acting at the Arden School of Theatre.

Saoirse-Monica Jackson wanted to become an actress from her early days and to give wings to her dreams she started auditioning for movies and TV shows soon after learning acting from  Arden School of Theatre.

She got her major role in 2016 on the Sky One series The Five. The popularity of the series helped her to gain media attention and as a result, she was profiled as the next Irish star actress in the Irish Independent magazine.

Jackson also toured the UK in the Birmingham Repertory Centre's production of Of Mice and Men. In 2017, she was cast in the critically acclaimed TV series, Broken. The following year, she starred in Lisa McGee British sitcom,  Derry Girls. The show hit the TV screen in January 2018 on Channel 4 which garnered 3.28 million viewers.

Saoirse-Monica Jackson is one of the rising British film actresses, she is just 3 projects down and garnered ma s sive popularity among audiences. She starred in Derry Girls and some of the main character of Derry Girls including Nicola Coughlan, Louisa Harland earned more than $30k from the series. So, Jackson might earn the same amount.

Saoirse-Monica Jackson is in a romantic relationship with her longtime boyfriend, Thomas Priestley. The duo is together for a quite long time. Unlike other celebrities, she is open about her relationship and keeps her fans and well-wishers updated via social media. She often posts pictures with her boyfriend on her Instagram where she has 19k+ followers.

A post shared by Saoirse-Monica Jackson (@saoirsemonicajackson) on Sep 5, 2017 at 7:56am PDT

Below we present the video of Saoirse-Monica Jackson,