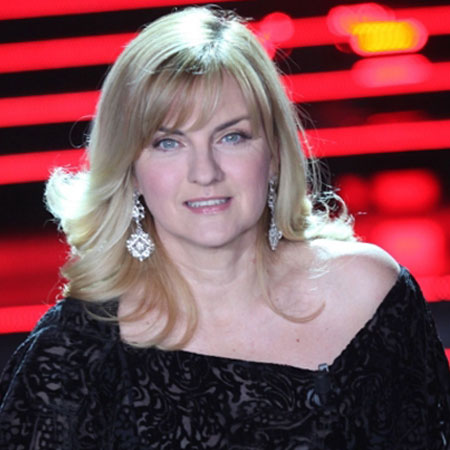 Sanja Dolezal is a Croatian singer as well as a television presenter. She is well known for being a member of the pop music band Novi Fosili from 1984 to 1991. Dolezal is the head of the culinary show "Three, two, one - bake."

Sanja Dolezal was born on May 9, 1963, in Zagreb, SFR Yugoslavia. She belongs to white ethnicity and holds a Croatian nationality.

Dolezal is a daughter of Mise Dolezal who is a songwriter and composer. She has a younger brother Tonka.

Dolezal studied at the music school in Zagreb. Later, she joined at Faculty of Philosophy where she decided to study sociology.

Sanja Dolezal began her singing career at an early age.  She appeared in commercials from Frutolino and Medolino brands of baby food manufactured by Croatian Company Podravka.

In 1981, Dolezal joined a Zagreb pop-rock band called “First Love” which was the first teen band in the former Yugoslavia active in 1978 to 1982. During that time with group Dolezal recorded the two album Private (1981) and If we remain alone (1982).

In the year 1984, Dolezal joined Croatian pop band Novi Fosili in 1984 where she and band released seven albums and became one of the most popular pop acts in Yugoslavia. The band sold the thousands of records, regularly performing at sold-out venues.

In 1991, Dolezal left the band and recorded own three solo albums. Later, she also appeared in the music and comedy show called Jel me netko trazio which aired on HRT.

Apart from singing, Dolezal host in several television shows. Later, she started to host her own daytime talk show Sanja aired on RTL television from two years since 2004.

In the year 2010, Dolezal appeared in the dancing with the starts as a host who aired on HRT. She was also a member of the jury of the show "Until the last Assembly.

Dolezal was in a relationship with Drazen Petrovic who was a greatest Croatian basketball player. She met him during her college days.

Later, Dolezal met Nenad Saric after he joined the pop band Novi fosili as a drummer and became a good friend. After two years, they started dating each other. A decade after their affair, they decided to live together and married in 1993.

The couple blessed with two children named Luka and Lea.

Dolezal husband, Nenad was a Croatian and drummer who died on Thursday, 2012 at 16 o’clock in the Karlovac General Hospital. Some sources say that Nenad got sick on Tuesday evening during a break in the family cottage on the retina.

He and his family intended to celebrate the birthday of Sanja Dolezal on 9 May.  But the doctor later said Nenad was no more.

Sanja Dolezal earns lots of from her signing and hosting career, however, her current net worth and salary is yet to be disclosed

Dolezal might earn a good amount money which makes her easier to live a happy life.