Born in a musical family, Sandi Patty is an American singer. She is most recognized for her wide soprano vocal range and expressive flexibility, which has led music critics to dub her “The Voice” She has given many hit albums including Morning Like This, Hymns Just for You.

Besides, her professional life, Sandi has also quite a successful love life. She is married twice and has apparently a good relationship with her husband.

Here, find out in detail about her career, earning, and net worth as well.

Sandi Patty was born into a musical Christian family. Her father was a minister of music while her mother was a church pianist. Known for her wide soprano vocal range and expressive flexibility, Sandi was born on July 12, 1956, in Oklahoma City, OK.

Talking about her education, she graduated from Crawford High School in San Diego. She also attended San Diego State University and Anderson University in Anderson, Indiana, where she studied voice with soprano Greta Dominic, however, she did her graduation with an emphasis in conducting. 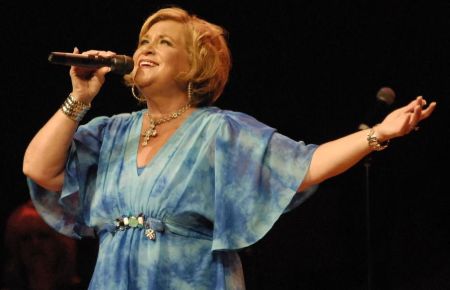 While still at Anderson University, she also, side by side, worked as a studio musician. All these while, she worked for local recording studios, where she sang background vocals, and commercial jingles, including one for Juicy Fruit gum.

Sandi got a boost in her career after she received her first two GMA Dove Awards in 1982. Soon, she began singing backup for Bill Gaither and the Bill Gaither Trio.

In 1984, she had her first national tour and got national acclaim after her rendition of "The Star-Spangled Banner" was included during the ABC Statue of Liberty re-dedication broadcast on July 6, 1986.

This is how you roll when you don’t want to put your face on. Thank you @brycecarey

This instantly got her major exposure getting her the chance to appear in multiple TV shows. She appeared in shows including The Tonight Show, Christmas in Washington, Walt Disney's Fourth of July Extravaganza, and the 1998 Pepsi 400.

Her 1990, inspirational single "I'll Give You Peace", which was written by Constant Change aka Dawn Thomas and Thomas Yarbrough, was released in popular records, entitled, "Another Time, Another Place", which peaked at #2 on the Christian Billboard charts.

64 years old singer Patti has been married twice. SHe was first married to John Helvering. They got married in 1977. However, their relationship didn't go as expected and they got a divorce in 1992.

She got married for the second time to Don Peslis. The couple got married in 1995 and they have since been together.

Talking about her children, Patti is the mother to eight children and grandmother to 3 children.

How Much is Sandi Patty's Net Worth?

As of 2020, American singer Sandi has a net worth of $20 million, as per Celebrity Net Worth. Sandi makes most of her money from her singing career.

Further, she also adds a decent sum to her wealth from her tours and concerts.