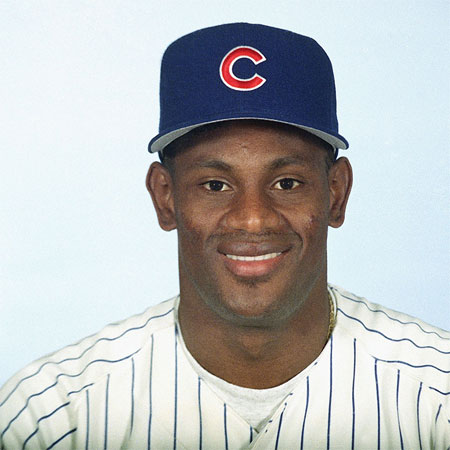 Sammy Sosa is a Dominican professional former baseball player. He played as a right fielder in his career. He collaborated with four Major League Baseball teams throughout his career.

Sosa became one of the best hitters in the league while playing with the Chicago Cubs. Sosa and Mark McGwire earned national fame for their notable home run hitting.

Sammy Sosa was born on 12 November 1968 in San Pedro de Macorís, Dominican Republic. He was born in a Batey community in Couselo but, has officially registered his birthplace as San Pedro De Macorís.

Sosa is the son born to Juan Bautista Montero and Lucrecia Sosa. He is Black in ethnicity and holds Dominican nationality. His paternal family, the Peraltas, are of Haitian descent and Dominican descent. His father died when he was seven-years-old.

Sosa played his major league game for the first time on 16 June 1989. He played with the Texas Rangers, wearing No. 17 jersey leading off as beginning left fielder. He scored his first home run against Roger Clemens.

On 29 July 1989, Rangers traded  Sosa with Scott Fletcher and Wilson Alvarez. Later, he was traded to Chicago White Sox for Fred Manrique and Harold Baines.

The White Sox traded Ken Patterson and Sosa to the Chicago Cubs for outfielder George before the 1992 season. In 1995, he was titled to his first All-Star team. He played  268 with thirty-six home runs and 119 RBIs in 144 baseball games.

In 1998, Sosa's 416 total bases became the most in a single season after Stan Musial's 429 in 1948. He achieved the National League Most Valuable Player Award for leading Cubs into the playoffs in 1998.

Sosa was also honored with a ticker-tape parade in New York City. He was also invited as a guest at US President Bill Clinton's 1999 State of the Union Address.

In 2003, the Cubs won the National League Central Division title. However, the year went bad for Sosa. He was kept on the disabled list for the first time since 1996 after removing his injured toenail.

Sosa was removed from Chicago Cubs-Tampa Bay Devil Devil Rays on 3rd June 2003. He was let go from the game in the first innings when umpires discovered Sosa had been using a corked bat.

Later, Sosa stated that he accidentally used the corked bat, which he only used during his batting practice.

During an interview with the Cubs manager, Dusty Baker, he said that use of the corked bat is strictly prohibited on his team. Sosa was suspended for eight games on June 6.

Sosa's suspension was reduced to seven games on June 11 after he appealed. He completed the season with 40 home runs. He scored two more in the 2003 NLCS against the Florida Marlins. The Cubs won 3 games to 1 before falling in seven games.

On 28 Jan 2005, Sosa was again traded to the Baltimore Orioles in exchange for infielder/ outfielder Jerry Hairston, Jr., infielder Mike Fontenot, and RHP Dave Crouthers. Sosa, along with his agent agreed to waive the clause that guaranteed his 2006 salary in order to facilitate the deal.

In Jan 2006, Sosa was offered two different minor-league by the Washington Nationals. He turned down both of the leagues. The same year, he accompanied President Fernandez of Dominican Republic during several diplomatic trips including to the United States, Taiwan, and Japan.

Texas Rangers and End of Career

On 30 Jan 2007, the Texas Rangers signed him to a minor league deal worth $500,000. The contract was the previous contract that he turned down from the Nationals.

Sosa began the 2007 season as the Rangers' designated hitter and occasional right fielder. The same year, Sosa's No. 21 was awarded to new pitcher Jason Marquis by the Chicago Cubs. Later, Sosa scored his 600th home run against Marquis.

On 25 December 2008, Sosa announced that he will not retire and play in the World Baseball Classic. He also announced his will to participate in free agent market in the hopes of signing in with a Major League ballclub in 2009.

The following year, Sosa announced to retire from baseball. He officially announced in the Dominican Republic that he was calmly looking towards his induction into the Baseball Hall of Fame.

Sammy Sosa is a married man. He married Sonia Rodriguez, a popular Dominican TV dancer. The pair tied the knot on 18 December 2004, at Altos de Chavon, La Romania. Prior to their official wedding, the couple had been already married civilly for twelve years.

Sosa also had two children together with his ex-wife Karen Lee Bright, Kalexy and Rolando. Sosa and Bright were married in 1990 and divorced by 1991.

Sammy Sosa has earned a tremendous amount of money through his successful career as a baseball player. He earns $124,068,000 annually on average. The former baseball player signed with Texas Ranger to minor league deal worth $500,000.

In 1997, Sosa signed a four-year extension contract worth $42.5 million. He owns a house in North Miami Beach. The house is worth $7.6 million and has a courtyard, pool, koi pond, and a terrace with exotic ocean views. Sammy Sosa is very fond of luxury cars.