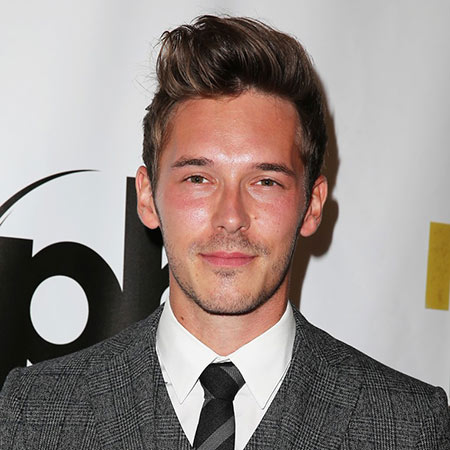 Sam Palladio is a British actor and musician. He was born on 21 November 1986 in Pembury, Kent, England, UK. His real name is Sam Christian Palladio Scott. He was brought by in Cornwall, England by his parents, who were also artists. He is the lead singer of the band called Salt Water Thief.

Palladio Studied theatre and music at Rose Bruford Drama College, Sidcup, London. He has a strong southern accent. He was a ma s sive fan of Americana, and bluegra s s and the more kinds of folky stuff. He likes the ’70s like Garfunkel and James Taylor, which is not too far from country. However, he does not really like the mainstream country that’s on the radio.

Palladio has appeared in numerous films and TV shows. His first on-screen appearance was in Little Crackers as Joe Strummer. After that, he appeared in Doctors as Jamie Laker, The Hour as Rockabilly, 7 Lives (2011) as Calvin, Cardinal Burns, Episodes as Stoke,  Strange Magic (2015) as Roland and Humans (2016) as Ed. Since 2012, he has been playing the role of Gunnar Scott in the series ‘Nashville’. He also appeared in ‘Runner, Runner’ (2013) as Shecky, opposite Justin Timberlake, Ben Affleck and Gemma Arterton.

Palladio has released several songs with fellow artist Clare Bowen throughout his career. His first single "If I Didn't Know Better" was released in 2012 on the album ‘The Music of Nashville: Season 1 Volume 1’. In his second album, ‘The Music of Nashville: Season 1 Volume 2’, he had two singles ‘Fade Into You’ and ‘I Will Fail’. In 2013, he released two singles ‘Change Your Mind’ and ‘Casino’. In 2014, he released ‘Lately’ and ‘It Ain't Yours to Throw Away’ and in 2015, he released ‘I Will Never Let You Know’ and ‘Wake Up When It's Over’. Sam is also an original cast member of Dreamboats and Petticoats, a popular musical that tours through the United Kingdom. He has also been known to perform at Kevin Spacey's bar called Pit Bar, which is located above The Old Vic Theater in London.

Sam is also famous for his good looks. In a Buzzfeed interview, when asked about his fabulous hair, Sam revealed that he had done a lot of campaigns for VO5 and even had a lifetime supply of it, but ran out after he moved to the US. He is the type of person who does not really share his personal information on the media. Although he is pretty active in social media, whether he is in a relationship and has a girlfriend is currently unknown. It has, however, been speculated that he has been in a relationship with his fellow Australian artist, Clare Bowen. There are even rumors hinting that he’s gay, but until now, nothing is really known for sure. It is estimated that his current net worth is around 500 thousand dollars.