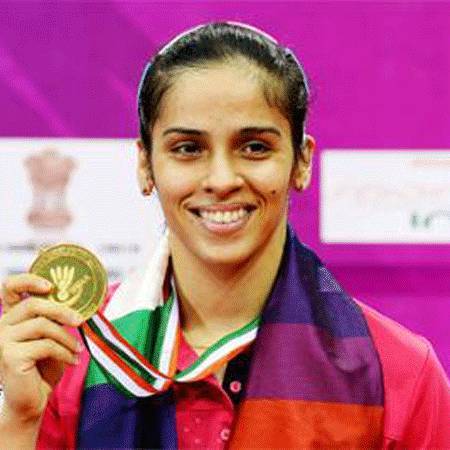 Saina Nehwal was born on 17 March 1990 in Hisar District, Haryana. She is an Indian badminton player and is currently ranked number 1 in the world by the Badminton World Federation. She is the first Indian to win the World Junior Badminton Championships and to won the medal in Badminton at the Olympics for India. Sania won a Bronze medal at the 2012 London Olympics, becoming the second Indian women to win an individual medal at the sports event. She is supported by the Olympic Gold Quest.

Saina Nehwal was born in a Jat family. Saina Nehwal is the daughter of Harvir Singh and Usha Nehwal. Her family shifted to Hydatabadh, Telangana and are currently living in Hyderabad. Her parents were former State Badminton Winners so her talent and dedication for badminton are within the gene. She started playing badminton at a tender age of eight.

Saina Nehwal was trained by Nani Prasad and was under strict fitness regime prepared by her trainer, at her childhood age only. She studied Lower KG to the third standard at Campus School CCS HAU, Hisar. She completed her tenth standard from Bhartiya Vidhya Bhawan’s Vidhyasharam School and the National Institute of Rural Development (NIRD) School Rajendranagar, Hyderabad.

Saina Nehwal became badminton under-19 National Champion, follow by victory in the prestigious Asian Satellite Badminton tournament. She is the first Indian to win World Junior Badminton Championships in 2008 and the first Indian to win Indonesian Open - a BWF Super Series in 2009. During London Olympics 2012, she won a Bronze Medal in the mega event. At present, she has won several accolades and rewards. In 2014, Saina Nehwal won Women's Singles of India Open Grand Prix Gold Tournament in January.

Saina Nehwal marriage plans are not yet made she left the decision of marriage is to her parents. When asked about Saina Nehwal husband name, she replied smilingly that she is focused on her career these days and not in a mood of marriage soon. Her parents must be searching for handsome son in law. Saina is unmarried till date.