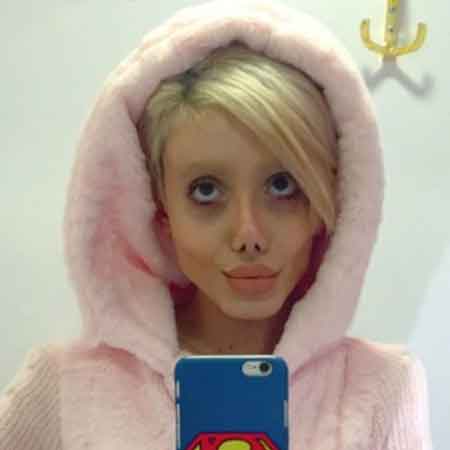 Sahar Tabar is best known for her zombie inspired appearances. She rose to fame after she admitted of having over 50 surgeries to make her look like her idol, Angelina Jolie. Later, receiving hate comments from the public, Tabar revealed she was just messing around for fun, using make-up and digitally altering her images.

Sahar Tabar was born on 1998 in Iran. She is best known for her zombie inspired appearances but she came to media attention after she admitted to having over 50 surgeries to make her look like Angelina Jolie. She shared her after surgery picture on her Instagram which received a lot of hate comments from the public.

Later, Tabar revealed she never wanted to replicate Angelina Jolie, she did for fun by using makeup and digitally altering her images. But she also disclosed, she has only one nose job.

Once in an interview with  Russian media outlet Sputnik, Tabar said,

"This is Photoshop and makeup. Every time I publish a photo, I paint my face in an increasingly funny way."

Sahar Tabar is unmarried and she isn't dating anyone at the moment. She is quite popular on Instagram, she has two Instagram account with 403k+ followers and 75.9k+ followers. She is a huge fan of Angelina Jolie and always wanted to be like her.

Sahar Tabar's net worth isn't less than six digit figure and is expected to be around thousands of dollars.  earned a good sum of the amount from her career, she might earn a decent sum from makeup tutorial and others.

Her costume makeup has been also elaborated by Jeannine K on her social media platform.