Ryan Robbins is a Canadian actor who is best known for playing roles of Henry Foss on Sanctuary, Ladon Radim in Stargate Atlantis and Charlie Connor on Battlestar Galactica.

Robbins, who was previously married to actress Rebecca Reichert, has currently been in a happy marital relationship with actress Karyn Michelle Baltzer.

Ryan Robbins was born on November 26, 1972, in Victoria, British Columbia, Canada, under the birth sign Sagittarius, in a middle-cla s s Canadian family.

He doesn't have a brother or sister so he was raised by his parents along in Victoria, British Columbia. He is of Canadian nationality and belongs to white ethnicity.

As for his height, Robbins is 5 feet 9 inches (1.75 m) tall and his weight is 70 KG (154 lbs). Regarding his educational background, Robbins completed his schooling and high school studies in British Colombia.

Ryan Robbins made his film debut in 1997 with the role of Simon Leigh in the independent film, Horsey, alongside Todd Kerns, Michael Roberds and Holly Ferguson.

In the following year, he made his television debut with the role of Chimp in an episode of Cold Squad. He has since appeared in dozens of television shows such as Continuum, Falling Skies, Ascension, Sacred Lies, The Guard, Delete and Alice, I Think.

Most famously, Robbins has appeared in the Syfy hit series, Stargate Atlantis as Ladon Radim, in Sanctuary as Henry Foss and in Battlestar Galactica as Charlie Connor.

He has also played the role of Diego in the Battlestar Galactica prequel series Caprica, Alistair Parish in the television series jPod, Wendell in the Canadian series The Guard, John Grey in the film Apollo 18 and Rand in Riese.

Being a successful Canadian actor, Ryan Robbins earns a decent amount of money from his acting career. The exact net worth of the 47-year-old Battlestar Galactica star has not been disclosed.

However, some online sources have suggested the total fortune of the Stargate Atlantis actor to be $1.5 million.

He and Reichert tied the knot in 2002 but the two parted ways and got a divorce eight years later in 2010. 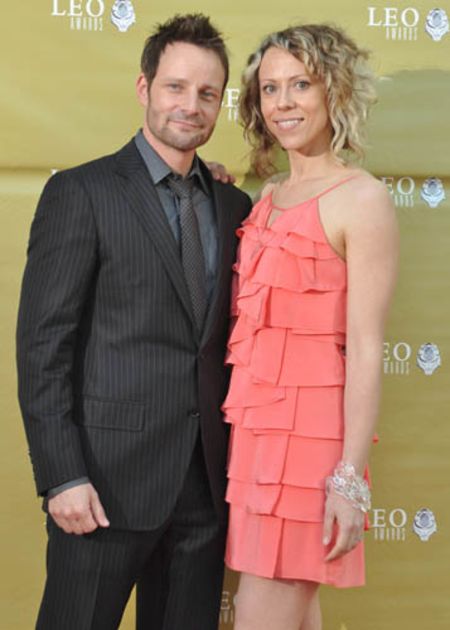 Following his split with Reichert, Robbins started dating another actress Karyn Michelle Baltzer, and on in 2014, the pair exchanged vows in a beautiful wedding ceremony.