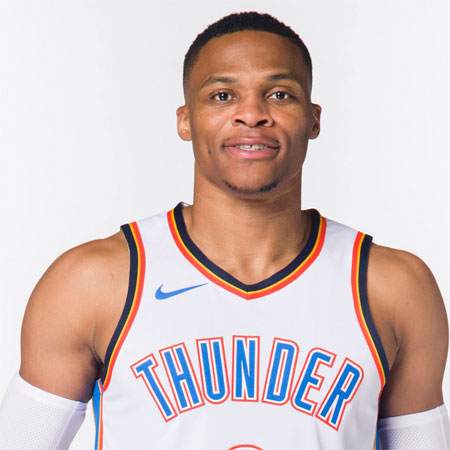 Russell Westbrook III is a renowned name in the field of professional’s basketball players.

Westbrook plays for Oklahoma City Thunder of the National Basketball Association (NBA) and has been recognized as a six-time NBA All-Star,  who has also won NBA All-Star Game Most Valuable Player for two times in 2015 and 2016.

In addition to that, he was awarded as the NBA Most Valuable Player in the year 2016 and 2017 and has set a record for the most with 42nd triple-doubles.

Russell Westbrook is also a gold medalist. He won two gold medals representing United States national, once in the 2010 FIBA World Championship and another in the 2012 Olympics.

Russell Westbrook III is the son born to Russell Westbrook Jr. and Shannon Horton. He was born on November 12, 1988, in Long Beach, California. As far as his nationality is concerned he is American and is of Afro-American ethnicity. He has a younger brother named Raynard.

In his childhood days, Westbrook was a close friend to Khelcey Barrs III. They always played together and always dreamt of joining UCLA. Unfortunately, Khelcey Barrs III died due to the enlarged heart during a pickup game.

Westbrook went to Leuzinger High School. He wasn’t able to join his school's varsity team until he was in a junior year and didn’t receive his first college recruiting letter until the summer before his senior year.

As a senior in the high school, Russell Westbrook was able to get more than 25 points per game and was enlisted to play for Ben Howland at UCLA.

During his freshmen year, at UCLA, Westbrook played as a defender and energy player off the beach. Also, he played as a backup player to Darren Collison.

The following season, Russell Westbrook received the opportunity and was named as a starter as Collison got injured.

Russell Westbrook career started in 2008. He was selected to NBA draft by the Seattle SuperSonics. After a year that was in 2009, Westbrook secured his first triple-double with 17 points, 10 rebounds, and 10 assists.

After becoming a full-time player in his second year the first season, Russell Westbrook, secured average 16.1 points, 8.0 assists, 4.9 rebounds, and 1.3 steals on that season.

Westbrook came into the limelight after the Thunder were eliminated in the first round by the eventual champion Los Angeles Lakers.

Westbrook scored 43 points against the Indiana Pacers on November 26, 2010. He secured 38 scored 38 points with 9 assists and achieved 15 rebounds in a triple-overtime making it his new career high.

Westbrook was selected to participate in 2012 NBA All-Star Game in the 2011-12 seasons, as he was mostly preferred by his coaches.

Westbrook continued his play in the second game of the series on April 25, 2013. He injured his right knee when Rockets guard Patrick Beverley came forward and attempt to steal the ball.

Though Westbrook was suffering from the pain, he managed to survive and put the game to an end scoring 29 points. On the next day, it was reported that there was a slight tear in his right meniscus. Since he had to have surgery he wasn’t able to participate for the rest of the playoffs.

Before the 2013-14 season started Westbrook had to go through second knee surgery due to which he couldn’t return to the basketball.

Despite all those injuries and surgeries, he returned after the first two games on December 25, 2013, and was able to score 14 points, 13 rebounds, and 10 assists.

On 2014–15 season opener Westbrook secured 38 points suffering from a small fracture again in the game against the Los Angeles Clippers.

The following season, Westbrook set his ninth career triple-double with 17 points, 15 rebounds having 127–115 win over the Golden State Warriors on January 16, 2015.

Also, Westbrook was able to secure his new career high securing 45 points on February 4, 2015, having a victory over the New Orleans Pelicans and broke the records again securing 48 points in a 116–113 loss to the Pelicans two days later.

On 13th of November, Westbrook secured his second straight triple-double, recording 21 points, a then career-high 17 rebounds and 11 assists in a 102–85 win over the Philadelphia 76ers.

Westbrook was named as NBA Western Conference Co-Player of the Month of December alongside Durant.

On January 20, 2016, Westbrook became the fourth player in the NBA history with at least 15 points, 15 assists, five rebounds and five steals in a game. He was able to record third straight triple-double on the next month on February 3

Westbrook completed the eighth season with 24 points with a career-high securing 19 rebounds and 14 assists in a 117–114 win over the Orland Magic.

Westbrook secured his 15th triple-double of the season along with securing 34th of his career with averaging 21 points, 15 assists and 13 rebounds having a win over Houston Rockets.

In 2016, Westbrook signed three-year expansion contract with the Thunder agreeing to receive $85.7 million.

In the same year, on November 30, he scored his fourth straight triple-double with 35 points, 14 rebounds and 11 assists in a 126–115 win over the Washington Wizards. Moreover, he was able to be the second player in NBA history having an average of a triple-double heading to December.

Westbrook was able to score the highest point in his career scoring 51 points in triple-double in playoff history on April 19, 2017, in the Game 2 of the Thunder’s first-round playoff series against the Rockets. Also, he was able to secure 47 points in the Game 5.

Further, he was awarded the NBA Most Valuable Player Award at the very first NBA Awards Show and if you calculate his points during the games, he has secured 16,000th career point, that made him the 112th NBA player in order to do so.

On the month of September, he again signed the five years long extended contract with the Thunder and the deals start with the 2018-2019 season.

Starting from his salary, Westbrook gets paid around $38.6 million per year as reported by the Forbes and has an estimated net worth of around $100 million.

In the year 2016, Westbrook signed a five-year deal with Thunder which was worth $80 million according to Celebrity Net Worth.

Also, he signed an extended three-year contract with Thunder on August 2016 which was worth $85.7 million which made his annual salary $28.5 million.

On September 29, 2017, Westbrook signed a five year $205 million contract extension with the Thunder where the actual deal starts with the 2018-2019 season.

Also, it’s believed that the deal could probably extend having a contract worth $233 million through 2022–23 season.

In case of endorsements, Westbrook signed Jordan brand in October 2012 which was his first commercial that he appeared on. On the next year, he signed a deal with Kings and Jaxs Boxer Briefs.

Further, he was named as a Marketing Creative Director of the denim brand True Religion and he also signed a deal with PepsiCo in order to become the global face of Mountain Dew Kickstart.

It cost him around $4.65 million which Disick bought and renovated in 2014. The total area of the house is 4,095 square feet which include a master bedroom with walking closet, a soaking tub for a total of five bedrooms and six bathrooms and a rain shower too.

Westbrook owns a Lamborghini Aventador which costs around US$393,695. Also, he surprised a single mother, Kerstin Gonzales with a car in Oklahoma City.

Russell Westbrook III not only have a successful career but also have a wonderful romantic life. He is a family man who lives with his wife Nina Earl and their first born child Noah Russell Westbrook, born on May 16, 2017.

As stated by the online sources, both Russell and Nina were in the California university. She was also a basketball player. She was one of the fastest players on the team and she definitely knew what she was doing.

In one of Russell Westbrook’s interview, he stated that

She sounds pretty fantastic — and super talented. But she's a smart girl. She's in school right now, trying to get her master's in psychology. She knows what she wants to do in life, which is great. That's easy for me to cope with.

The couple dated for few years before getting engaged in I and got married on August 9, 2015, and welcomed their first baby boy after a year.