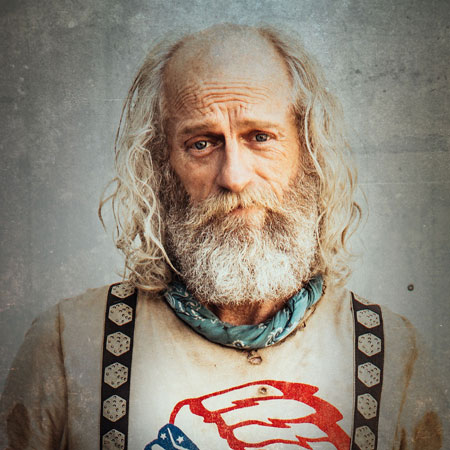 Russell Hodgkinson is an American actor most known for his supporting roles in a wide variety of films, especially horror films. He is well known for his role, Steven Doc Beck in the SyFy TV network series titled Z Nation.

Russell began his acting career with a TV film The Court-Martial of Jackie Robinson. He later played in few series and films. He appeared in lead role in a TV series Z nation from2014-17.

Russell Hodgkinson was born on August 14, 1959, in Homestead, Florida. He holds an American nationality and belongs to White-American ethnicity.  His parents were Buck Hodgkinson and Juanita Hodgkinson.

He grew up in St.Petersburg, Florida with his family and began his acting career by playing the Scarecrow in The Wizard of Oz when he was just in the seventh standard.

Throughout his high schools, he worked in numerous films. In order to join the army, he passed his theater scholarship and became a father at his senior year.

From his early age he was involved in the field of acting and when he was at his high school, he appeared in several movies. He was provided with a scholarship at the Fort Bragg Playhouse, so he performed his talent regularly at the Playhouse. He then moved to New York City when he earned the Equity card by the end of enlistment.

Hodgkinson made his professional debut playing Jimmy Curry in The Rainmaker along with Joe Namath at Philadelphia’s City Line Theatre.

Moreover, Hodgkinson made a breakthrough after playing in the action and comedy TV series Z Nation along with other famous stars including DJ Qualls, Tom Everett Scott, Emilio Rivera. He also made a guest featuring appearance on Leverage and Grimm.

Hodgkinson was honored with Big Easy Entertainment Award for Best Supporting Actor in Musical for 1999, 2000 and 2001. He also served in the National Guard from 1986 to 1991.

As Russell has appeared in numerous movies, he is most known for his work in thriller movies. His net worth has not been revealed yet but it is believed to be more than $1 million. He is living a luxurious life with his wife and two daughters.

Russell Hodgkinson is a married man. He is married to Shelley Poncy since 1990. He met his future wife Shelly Poncy first time in the Long Beach, California in the mid-70s. Then they lived together for nearly two decades.

In 1990, the couple wed in a private ceremony where only their family members and close friends were invited. Then, they stayed at Louisiana for decades and moved to Seattle and pursued their career in a theater. Russell and his wife Poncy have five grandchildren with their two daughters.