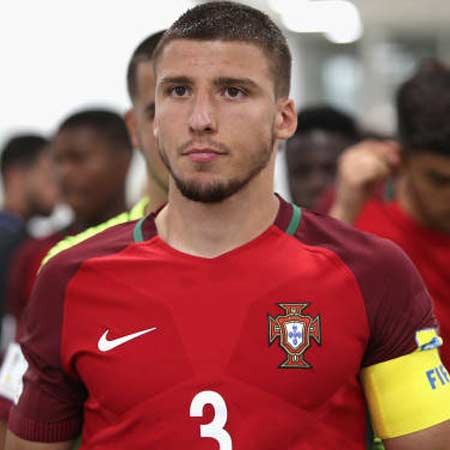 Portuguese professional footballer Ruben Dias is a competent and aggressive tackler who currently plays for Benfica as a defender. Standing at the height of 6 ft 1 in, he has a good technical ability, as well as good distribution and crossing ability. Internationally, Dias has represented his country at U-16, U-17, U-19, U-20, and U-21. Also, he will also appear for his nation in 2018 World Cup.

Ruben Dias was born Rúben Santos Gato Alves Dias in Amadora, Portugal on May 14, 1997, to Rubén Díaz Sr. He is Portuguese as per nationality. He started his early career playing for the local club Estrela da Amadora at the tender age of six and played for the club until 2008.

The same year, Dias joined the youth academy Benfica and showed his great potential playing for the junior side until 2015.

Ruben Dias made his professional debut with Portuguese professional football team Benfica B in a 2015-16 Liga Pro match against Chaves. He played a key role for the club as he helped the team to reach the final of the 2016–17 UEFA Youth League.

Dias played for the first time in a Primeira Liga match against Boavista. But, he underwent surgery because of appendicitis and took a rest for a month. He netted his first goal for the club in a  2-2 draw match against Vitória de Setúbal on 29 December 2017.

The Portugal manager Fernando Santos has called him up to join the senior side on 15 March 2018, in a friendly match against Egypt and Netherland. He is also listed in the squad for the FIFA World Cup in Russia.

Ruben Dias has made a lot of money from his career. But the exact amount of net worth is yet to be revealed which as per several reliable online sources is speculated to be more than $1 million.

Ruben Dias is not married yet and has not made any public appearance with anyone as of yet. The footballer seems focused on his rising career rather than anything.

Below are some best moments during Dias' time in Benfica.