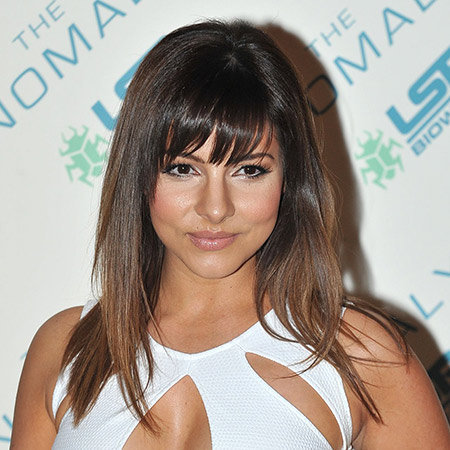 Roxanne Pallett is an English actress as well as a singer, best known for portraying as Jo Sugden in the ITV soap opera Emmerdale from 2005 to 2009.

Pallett was the crowned winner of Soapstar Superstar and Celebrity Stars in Their Eyes both in 2006 and Dancing on Ice in 2009. She has also portrayed in several horror movies including Lake Placid 3, Wrong Turn 6: Last Resort, Devil's Tower and Habit in the theater which was critically acclaimed.

Roxanne Pallett was born on 26 December 1982 in Carlisle, Cumbria, England, U.K. She belongs to white ethnicity and holds a British nationality.

Pallett was raised in Currock by her mother, Monica, and grandmother. Her Iranian father abandoned her mother when Roxanne was a few days old.

At the age of 16, Roxanne lost her home in a fire, and several months after the incident, her grandmother died.

Roxanne Pallett studied at Robert Ferguson Primary School and Trinity school. Later, she joined Liverpool John Moores University where she earned a BA Honors Degree in Media and Cultural Studies.  She also studied at the Manchester School of Screen Acting.

During Roxanne Pallett’s last year in her university, she formed a girl band named Urban Angel for whom she wrote songs for this group. After signing with a record label, she spent a year in the music industry.

Roxanne landed on her role in Emmerdale when auditioned in 2005. The producers saw acting potential in her and asked to play the role of Jo Stiles, a role they were still young. She received critical acclaim for her major domestic violence storyline in the year of 2008-09.

In 2008, Roxanne Pallett became the face of the UK domestic violence charity, Refuge. During her three years on Emmerdale and 130 shows, she was nominated for several awards as Best Actress at The British Soap Awards 2007, 2008, 2009, TV Quick Awards 2008, and Sexiest Female, the Inside Soap Awards, and Best storyline.

She has been on many covers in national magazines and has also won Celebrity Stars in Their Eyes for her singing talent as Gloria Estefan.

In 2006, Roxanne regularly topped the sexiest poll awards and was as one of the 100 sexiest women in the world during 2006. She has also done photo shoots for Maxim and Loaded.

After leaving the show, Emmerdale, Roxanne Pallett participated in the fourth series of Dancing on Ice. She was partnered with professional dancer Daniel Whiston and also went on a Dancing on Ice Bolero Anniversary UK tour in the year of 2009.

During 2010, Pallett made her debut in Hollywood through Lake Placid 3 and made her professional stage debut in a lead role in Rock Around The Clock. She also had a guest role in BBC’s Casualty.

In the year 2012, Pallett played in BBC’s drama series called Waterloo Road and in British film, Devil’s Tower. Later, she played as Louise in the film; It’s A Lot which was released in 2013.

Then later after many years, Roxanne again dated an actor, Harry Neale in 2013 but after six months of their relationship, they separated.

In 2014, she began dating Greg Burns but soon separated. The following year, she was rumored to have a relationship with Simon Webbe but was never confirmed.

This year, Pallett is dating her co-star Elliot James Langridge. The couple first met on the set of their movie, Habit. It seems like Pallett is having a great time with her new boyfriend as their pictures of on and off screen are always seen in public.

We can a s sume that she has earned millions of dollars, but her estimated net worth is not available right now. Roxanne Pallett doesn’t seem to leave this industry this soon.