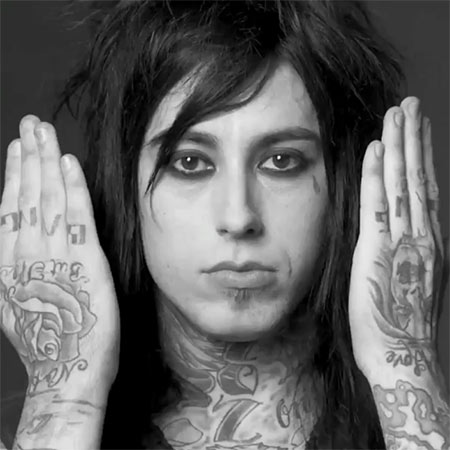 Ronnie Radke is a rock singer, musician, songwriter and record producer. He was born as Ronald Joseph Radke on 15 December 1983, in Las Vegas, Nevada. Radke was abandoned by his mother and left in the hands of his father and grandmother at a young age. He has a brother named Anthony. As a child, he had a keen interest in music and started learning piano and guitar.

Ronnie Radke formed a band, 'Escape the Fate' in 2015, with his friends Monte Bryan Money (lead guitar), Max Green (bass), Robert Ortiz (drums) and Omar Espinosa (rhythm). The gig awarded them the opportunity to open a show on the band's headlining tour with 'Alkaline Trio' and 'Reggie and the Full', subsequently leading to Escape the Fate's record deal with Epitaph.

On 26 September 2006, the band released their debut studio album, “Dying is Your Latest Fashion.” Omar left a year later due to personal issues. Ronnie Radke was asked to leave the band after he was sentenced to prison in June 2008. He was accused of multiple run-ins with the law involving narcotics and battery for a fight that led up to the death of Michael Cook.

After coming out of prison in December 2010, Ronnie Radke started to form a new band called 'From Behind These Walls' and the band’s name was later changed to 'Falling In Reverse'. The band went through many lineup changes before finally sticking with Jacky Vincent, Ryan Seaman, Mika Horiuchi, Derek Jones and of course, Ronnie. The band released two singles, "The Drug In Me Is You" and "Raised By Wolves" via Epitaph Records. On 26 July 2011, they released their album and sold 18,000 copies in its first week and was placed at #19 on the billboard 200.

In mid-2013, Ronnie Radke started a channel on YouTube and released his first solo single “The Fairweather Fans” on 31 May. He then released songs like 'What's Up Earth', 'I Was Cars' and so on. Ronnie once appeared on an episode of 'L.A. Ink' with 'Kat Von D, during which he got a tattoo of a frog riding a horse.

Ronnie Radke dated Playboy model Crissy Henderson and had a daughter named Willow Grace Radke on 11 June 2013. Ronnie  has been datingDJ and Dash Dolls reality star Caroline Burt since 2015 and currently resides in Las Vegas. Ronnie still strives to be the legend in rock music history and has a net worth of $4 million dollars.