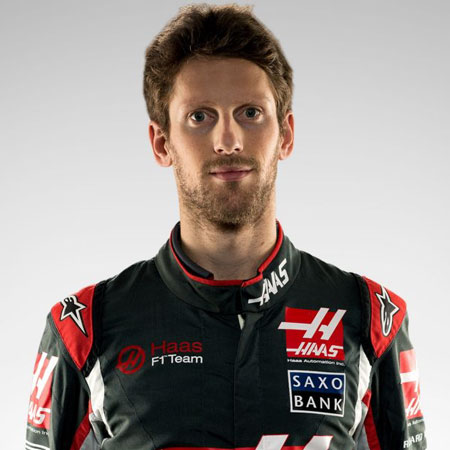 Romain Grosjean is a French Formula One racing driver who currently races for the Haas F1 Team. He is the 2007 Formula 3 Euro Series drivers champion. He made Formula One debut in 2009 for Renault and came 4th at the European Grand Prix. Furthermore, Grosjean has been racing for Haas F1 Team since September 29, 2015, alongside Ferrari test driver Esteban Gutierrez.

Romain Grosjean was born on April 17, 1986, in Geneva Switzerland. He holds dual Franco-Swiss citizenship. He was born to Marie-Helene Brandt and Christian Grosjean. His mother is a Swiss painter and is the granddaughter of French weapon designer, Edger Brandt.

Grosjean attended Ecole MOSER in 2002 and graduated in 2005.

The 5 ft 11 inches tall Romain Grosjean started his racing career participating in the Formula Lista Junior Championship where he won all the ten rounds. He then took part in the French Formula Renault championship in 2004. Grosjean stood 7th with a single win in his first season but was the champion of the 2005 season with ten victories.

Grosjean appeared at the 2005 Macau Grand Prix making his Formula Three debut. He could not perform better in 2006 and stood 13th. He moved to the ASM team in 2007 and won the title.

Romain Grosjean then appeared in the GP2 Series and stayed until the end of the 2008 season and maintained 4th position despite missing the last four rounds. He then joined Formula One as Renault test driver for 2008.

In 2010, He left Formula One and involved as a sportscar racer. Grosjean returned to Formula One as a test driver for the Lotus team. On September 29, 2015, he announced his transfer to the Haas F1 Team and currently is its team member.

Romain Grosjean's Net Worth And Salary

Romain Grosjean is reported to have a net worth of $12 million. He is paid a huge salary from the Haas F1 team. He has racked up such an impressive amount of money from his career as a racing driver.

His annual income from the salary is $4.5 million excluding bonuses according to the 2016 report and can assume to have increased. Grosjean is also endorsed by several other companies with a lucrative contract.

He Shares Two Kids With His Wife, Marion Jolles

Former Lotus F1 team driver, Romain Grosjean married Marion Jolles on June 27, 2012, and has two children with her. His wife is a French journalist and television presenter. The ceremony was held in a small church in Chamonix, France.

The couple was dating each other since 2008 and married four years later. The wedding was organized in front of their family, friends and some other personalities including Jean-Pierre Verizon (team physiotherapist and coach), Eric Boullier (Team manager).

Soon after, they had a two-day honeymoon trip to the famous French ski resort, Megeve. The couple revealed that they were expecting a child on January 26, 2013. Jolles gave birth to the first son, Sacha on July 29, 2013. The couple was blessed with the second child, a boy named Simon on May 16, 2015.

It's been over seven years that the couple is still looking more strong and supportive with each other.