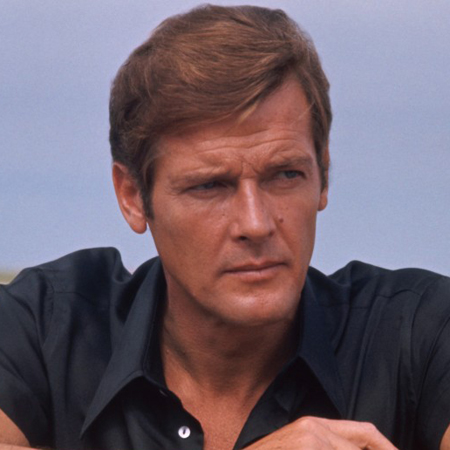 In 1991, he was appointed as a UNICEF Goodwill Ambassador. In 2003, Queen Elizabeth II knighted him for services to charity. In 2007, he received a star on the Hollywood Walk of Fame for his commendable performance in television shows and films.

Sir Roger Moore was born as Roger George Moore on 14 October 1927 in Stock well, London Borough of Lambent, London. His mother Lillian was a housewife and father George Alfred was a policeman.

Roger was of white ethnicity. While Roger was small he had to face the Second World War. He learned a lot of new things at the time. He had no intention of becoming an actor at the time.

Roger received his education from Battersea Grammar School. He later began studying at Dr.Challoner's Grammar School based in Amersham, Buckinghamshire. He then attended the College of the Venerable Bede at the University of Durham but did not graduate and at the tender age of 18, was conscripted for national service.

He was commissioned as a second lieutenant in Royal Army Service Corps as number 372394. He shortly became a captain. During that time Roger began searching for entertainers for the armed forces passing through Hamburg. Roger had prior to his national service, studied at the Royal Academy of Dramatic Art.

Moore’s first appearance in a movie was as an extra in Caesar and Cleopatra in 1945 when he was just 17. His first real performance came in 1954 in the film The Last Time I Saw Paris as character Paul. He went on being seen in many movies like in 1956’s Diane as Prince Henri (Late King Henry II), 1958’s Ivanhoe as character Ivanhoe, 1959’s Maverick as Beau Maverick.

He’s till date known for his role as Simon Templar in The Saint, The Fiction Makers and Vendetta for the Saint. Roger then ended up getting the role of James Bond in the James Bond series. He suddenly became a huge sensation in the film industry. Roger first appeared as James Bond in 1973’s Live and Let Die.

In1974 he came back with the bond series in The Man with the Golden Gun. Roger played Sherlock Holmes in Sherlock Holmes in New York in 1977 and in the same year was seen in the Bond series, The Spy Who Loved Me. In 1979 he was seen in Moon maker. In 1980 he was seen in another Bond movie, For your Eyes only and in 1985’s A View to a Kill. He was then replaced by another actor Timothy Dalton. His last performance stands out to be A Princess for Christmas in 2011.

Roger Moore’s had $100 million net worth before his death. He had earned a huge amount of net worth from his successful acting career. He used to have $1 million salary for each film of James Bond film series.

Moore had suffered from prostate cancer for a long time. In 1993, he was diagnosed with it and underwent successful treatment for the disease. However, his disease was not successfully diagnosed it root spread to his liver and lungs.

According to his personal spokesman, Moore died due to prostate cancer on 23 May 2017 in his home Crans-Montana, Switzerland in the presence of his family.

Moore married actress and ice skater, Doorn Van Steyn. The couple had a disturbing relationship and ended having a divorce. In 1952, Moore met Welsh singer, Dorothy Squires. They got married and then moved to the USA.

Due to their huge age gaps, they had tension. Due to many miscarriages, the couple was unable to have children.

Roger’s affair with Italian actress Luisa Mattioli became another one of the causes of their divorce. He got married to girlfriend Mattioli in April 1969. He had three children named Deborah, Geoffrey and Christian with a spouse, Mattioli.

The couple separated in 1993 when Moore began having an affair with Danish socialite, Kristina ‘Kiki’ Tholstrup. Mattioli had refused to give him a divorce until 2000. Moore went on to marry Tholstrup in 2002.They are living happily together.

Moore stood tall at the height of 1.85 m. His bio can be found on social media sites.