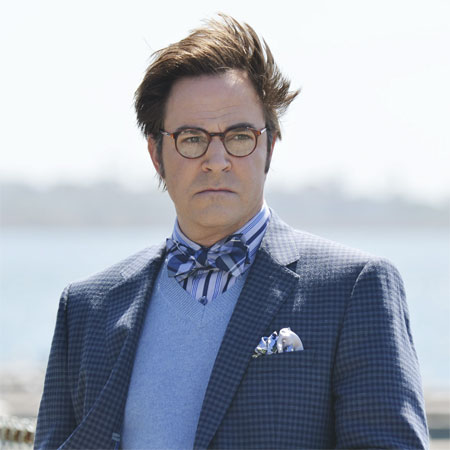 Roger Bart is an American singer and actor, well known for his appearance in the movie Big River as Tom Sawyer.

Roger Bart was born on 29 September 1962 in Norwalk, Connecticut, United States of America. He is the son of a chemical engineer and a teacher. Bart was raised in Bernardsville, New Jersey.

Roger Bart made his first appearance in the movie, Big River as Tom Sawyer in the year 1987. His other theatre works include the portrayal of Harlequin in Triumph of Love and Jonathan in Alan Menken/Tim Rice.

From 1996 to 1997, Roger portrayed Bud Frump in the USA national tour of How to Succeed in Business Without Really Trying.

Roger Bart has also portrayed as George Carlin's son on the television show called The George Carlin Show and played as Bram's assistant, Paul Newman, in Bram and Alice.

In short time he became famous with his role of George Williams who is an unhinged homicidal pharmacist and loves Bree Van de Kamp (Marcia Cross), on a television show called Desperate Housewives, which made him achieve a SAG Award.

Moreover, Bart has also given his vocal for Hercules in Disney's Hercules, as well as the singing voice of Scamp in Lady and the Tramp II: Scamps Adventure.

He also starred in the 2004 remake of The Stepford Wives with Matthew Broderick, Christopher Walken, Nicole Kidman, Bette Midler, and Glenn Close.

Roger appeared in the lead role as Dr. Fredrick Frankenstein in the musical adaptation of Mej Brooks' Young Frankenstein, which was launched in November 2007.

Bart along with Brad Oscar reprised their roles as Max Bialystock and Leo Bloom, at Starlight Theatre in Kansa City, Missouri. The show started from 23rd August to 29 August 2010.

Later, Roger went back to Broadway in the musical, Disaster!, as performances started in Feb 2016.

Roger Bart is a married man, but details regarding his wife is still a secret. Bart has two children named Ali Kendall and Eller Bart (born in 2001).

Roger Bart earns a decent amount of money from his successful career as an actor and singer. He is also the winner of Tony Awards, Drama Desk Awards, and Screen Actors Guild Awards.

His one of the most popular role as an actor was in 2005, after portraying as George Williams in the Television series, Desperate Housewives. As of 2017, Bart's net worth is estimated to be $ 3 Million.